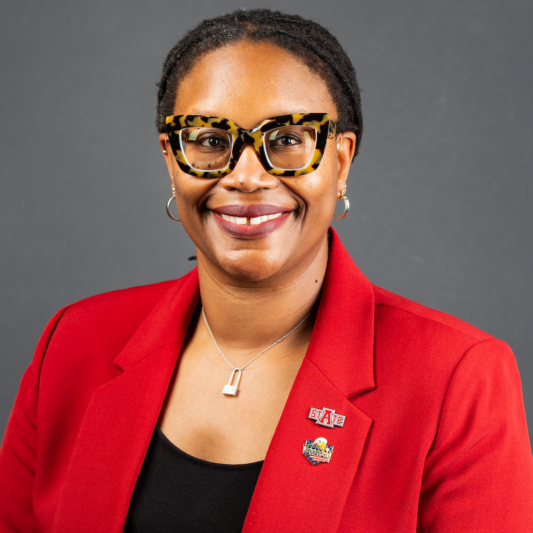 Dr. Cherisse Jones-Branch is Dean of the Graduate School and Professor of History at Arkansas State University-Jonesboro.  She received her B.A. and M.A. from the College of Charleston, and a doctorate in History from The Ohio State University.  Dr. Jones-Branch is the author of Crossing the Line: Women and Interracial Activism in South Carolina during and after World War II and the co-editor of Arkansas Women: Their Lives and Times.   A second manuscript, Better Living By Their Own Bootstraps: Black Women’s Activism in Rural Arkansas, 1913-1965, is now available from the University of Arkansas Press.  Jones-Branch is currently working on a third book project titled “. . . To Make the Farm Bureau Stronger and Better for All the People:” African Americans and the American Farm Bureau Federation: 1920-1966.  She is also the co-editor of the “Rural Black Studies” series for the University of Arkansas Press.

Clara Belle Drisdale, the first African American to graduate from New Mexico State University, was born to sharecroppers Isaac and Carrie Melinda Moppins Drisdale in LaGrange, Texas on October 29, 1885. She was first educated in a one room country school house near LaGrange but … END_OF_DOCUMENT_TOKEN_TO_BE_REPLACED

African American artist and dancer Thelma Johnson Streat was born in Yakima, Washington on August 29, 1912, the second of Gertrude Beatrice Carson and James A. Johnson’s five children.  Streat’s artistic ability was evident at a young age.  She graduated from Washington High School in … END_OF_DOCUMENT_TOKEN_TO_BE_REPLACED