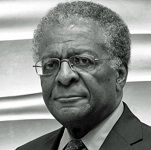 Mr. Lewis has worked for The Washington Post, including assignments in Southeast Asia and the Middle East. Later, he was an American diplomat, serving in Saudi Arabia, Cyprus, and Greece.

In 1983, he founded a crisis management consultancy firm specializing in the international ocean transportation industry. It was a shipping accident in Cape Town in 2003 that took him to South Africa for the first time.

For 10 years until 2004, Mr. Lewis was a Visiting Professor at the Massachusetts Maritime Academy. He is also the author of the book The Strategic Balance In The Mediterranean, an analysis of naval power in the Mediterranean Sea during the Cold War.

Dr. Jotello Festiri Soga in 1886 became the first South African of any race to receive a degree in veterinary medicine. Born in 1865 into a distinguished Xhosa family from the Eastern Cape, his parents were Rev. Tiyo Soga, and Janet Burnside Soga, who was … END_OF_DOCUMENT_TOKEN_TO_BE_REPLACED