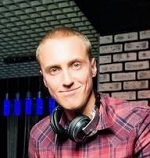 Ivan Tchijevsky was born in Moscow, Russia in 1982 into a musical family, and his father is a former international journalist and tango dancer. His mother’s sister worked as a vocalist in jazz and variety orchestras since the mid-60s in the USSR and his uncle was a famous saxophonist from Ukraine.

From the age of 14, Ivan began attending various musical events, collect vinyl records, produce electronic music, break-dance, and play DJ sets in clubs and hip-hop festivals. In his university student years, the main theme of his articles was currency competition, which was published in more than 10 universities in Russia.

In 2017, Ivan released an edited album entirely built on samples from 1970s and 1980 Soviet records sold mainly in Ukraine. He also recorded 9 podcasts and articles about Soviet jazz, Caucasus folk jazz, and the first Russian hip-hop artists for the French site Parisdjs.com. He also participated in public organizations including the World Public Forum Dialogue of Civilizations, ACI Russia, and the Russian Academy of Geoconomics.

Egyptian Sheikh Muhammad Ayyad al-Tantawi, one of the youngest teachers of Arabic studies in Egypt (at that time the Ottoman Empire), traveled to and worked in Russia. During his residence in Russia, he was the first to compile an Arabic grammar manual in the Russian … END_OF_DOCUMENT_TOKEN_TO_BE_REPLACED

Lydia Fedorovna Arkhipova was a prolific painter who achieved fame in the Union of Soviet Socialist Republics and abroad. She also developed her original style which challenged the major trends in Soviet-era art. Arkhipova’s father was Frederick Bruce Thomas, widely known before the Russian Revolution … END_OF_DOCUMENT_TOKEN_TO_BE_REPLACED

In the following article, Russian DJ Ivan Tchijevsky describes exclusively for BlackPast.org the long history of black music and black musical performers in Russia. Writing from a musical festival in Odessa, Ukraine in June 2019, he outlines his views below. As I visit festivals of … END_OF_DOCUMENT_TOKEN_TO_BE_REPLACED