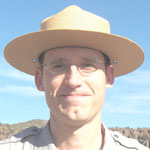 Chuck Hunt, a 17-year veteran of the Department of the Interior, is the
Superintendent of Fort Davis National Historic Site in West Texas. He
began his federal government career in 1989 as a Presidential Management
Intern. He has served in a number of assignments within the National Park Service including at Big Thicket National Preserve, San Antonio Missions
National Historic Park and NPS’s Office of Congressional Affairs. He
also spent 11 years with the U.S. Bureau of Land Management in
Washington, D.C. and in New Mexico. Chuck has written extensively in the
area of natural and heritage conservation having co-authored Big Thicket
People (University Texas Press, 2008) and Houston Wilderness Atlas of
Biodiversity (Texas A&M University Press, 2007) as well as numerous
articles in the Houston Chronicle concerning heritage conservation
(2002-2007).

Fort Davis stands unique among frontier forts in that it became the Regimental Headquarters for all four Buffalo Soldier regiments that served during the last decades of the 19th-century. Troopers of the Ninth Cavalry were the first Buffalo Soldiers to garrison Fort Davis. Arriving in … END_OF_DOCUMENT_TOKEN_TO_BE_REPLACED