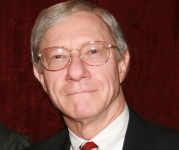 John C. Hughes is the chief oral historian for the Office of the Secretary of State in Washington State. He retired as editor and publisher of The Daily World in Aberdeen, Washington, in 2008 after a 42-year career that saw him win awards for investigative reporting, historical features, editorials and columns. An alumnus of the University of Puget Sound and the University of Maryland, he is a trustee of the Washington State Historical Society and has contributed to several Northwest history books, including “On the Harbor: From Black Friday to Nirvana.”

In the following account John C. Hughes, chief oral historian for the Washington State Legacy Project, discusses the life and legacy of Lillian Walker, who has been a civil rights activist in Bremerton, Washington, since World War II. Established in 2008 by Washington Secretary of … END_OF_DOCUMENT_TOKEN_TO_BE_REPLACED