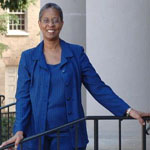 Trudier Harris is the J. Carlyle Sitterson Professor of English at the University of North Carolina at Chapel Hill. She has lectured and published widely in her specialty areas of African American literature and folklore.

Dr. Harris has published articles and book reviews in such journals as Callaloo, Black American Literature Forum, Studies in American Fiction, and The Southern Humanities Review. Her authored books include From Mammies to Militants: Domestics in Black American Literature (1982), Exorcising Blackness: Historical and Literary Lynching and Burning Rituals (1984), Black Women in the Fiction of James Baldwin (1985, for which she won the 1987 College Language Association Creative Scholarship Award), Fiction and Folklore: The Novels of Toni Morrison (1991), The Power of the Porch: The Storyteller’s Craft in Zora Neale Hurston, Gloria Naylor, and Randall Kenan (1996), Saints, Sinners, Saviors: Strong Black Women in African American Literature (2001), and South of Tradition: Essays on African American Literature (2002).

While many Americans are familiar with the song, “The Yellow Rose of Texas,” few know the story of Emily West, the African American woman who was the inspiration for its creation.  In the excerpt below from a longer article that first appeared in 1996, University … END_OF_DOCUMENT_TOKEN_TO_BE_REPLACED