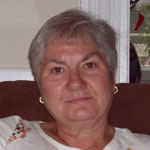 Rose Mary Graveline works at the University of Vermont, Graduate Counseling Program, as administrative staff. She is a native of North Carolina and moved to Vermont in the late 1960s.  By the 1980’s she developed a passion for genealogy, which ultimately lead to the discovery of her grandfather’s military service as a Buffalo Soldier and interest in the soldier’s stories.

She hosted a “Vermont Buffalo Soldier Descendant Reunion” in July of 2007.  Participants included 7 grandchildren, two great-grandchildren and one great-great-grandchild of 10th Cavalry soldiers who remained in Vermont after retirement or discharge.  Dr. Frank N. Schubert, author of On the Trail of the Buffalo Soldier II:  Biographies of African Americans in the U.S. Army, 1866-1917 (Lanham, Maryland: Scholarly Resources Books, 2004), also attended the reunion.

John Ralph Lyons was born February 22, 1888 in Lewistown, Mifflin County, Pennsylvania to James Levi and Harriet (Baptist) Lyons.  His father was a barber and musician.  He had four brothers and two sisters, and his mother died in childbirth when he was a teenager.  … END_OF_DOCUMENT_TOKEN_TO_BE_REPLACED

In July of 1909, 750 10th Cavalry “Buffalo Soldiers” marched into Vermont for their assignment at Fort Ethan Allen, Colchester, Vermont.  Prior to their arrival, they had been stationed in various other locations such as Cuba, Kansas, and the Philippines, all warmer climates.  During their … END_OF_DOCUMENT_TOKEN_TO_BE_REPLACED