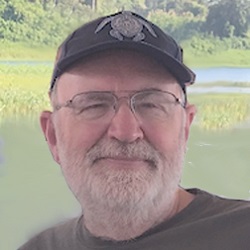 Gerry Rasmussen, originally from Marysville, Washington, received his B.A. in Fine Arts from Washington State University in Pullman over 50 years ago. He started his graphic design career in the state capitol, Olympia, with the Washington State Library. He retired in March 2003 from the Washington State Department of Transportation after becoming the agency’s Graphic Design Program Manager the previous five years. While there, some of his favorite projects were designing covers for the agency’s tourist maps, ferry schedules, aviation and ferry newsletters, and the graphics on 118 Grain Train hopper cars. Gerry has also received accolades from his peers and clients for his work, including the State Librarian, the Transportation Secretary, and the Governor’s Office.

After a nearly 33-year career in government service, Gerry still does freelance graphics. He has continued to design informational and marketing publications and created logos for several firms, including a bank and hospital, other state and county agencies, and even the game cards for a children’s math game. He feels that doing freelance graphics keeps his creative juices flowing, which is how he got connected to BlackPast.

He enjoys rooting for the WSU sport teams, doing family genealogy research, and traveling and going on cruises with his wife Cathy.

Jonathan (“Jon”) Michael Batiste is an American bandleader, composer, arranger, actor, “harmonabord” player, and television personality. He was born on November 11, 1986, in Metairie, Louisiana, and grew up in the neighboring New Orleans suburbs. By age 8, he was playing percussion and drums with … END_OF_DOCUMENT_TOKEN_TO_BE_REPLACED