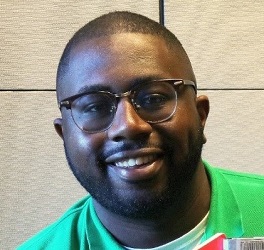 Derrion Arrington is a Librarian at the Mississippi Library Commission. He was exposed to The Miseducation of the Negro by Carter G. Woodson at Tougaloo College. He began echoing an excerpt from his book: “Philosophers have long conceded, however, that every man has two educators: “that which is given to him, and the other that which he gives himself.” That ignited a passion that never ceased. He graduated from Tougaloo College and went on to get my Masters at Tulane University in New Orleans in Public History. From there, he became a published writer with his academic essay entitled “Standing Firm in the Dixie: Dr. Benjamin Murph and the Origin of Laurel, Mississippi’s Freedom Movement” which appeared in Study The South, a publication of the University of Mississippi Press. The success of essay reached his hometown of Laurel, Mississippi and he became the Curator of Laurel’s Black History Exhibit and the Lynch Street Exhibit at Jackson State University.

Milliken’s Bend was a small community in Louisiana located on the west bank of the Mississippi River, about 15 miles above Vicksburg. It was near the border of Madison and Carroll Parishes (now East Carroll Parish). Cotton and corn were the primary crops, and hundreds … END_OF_DOCUMENT_TOKEN_TO_BE_REPLACED

Mississippi became the mecca of the Freedom Movement in the early 1960s due to local and out-of-state activists who formed or supported grassroots efforts to gain civil rights for its black citizens. One of those local activists was Benjamin Ellery Murph. Murph was born on … END_OF_DOCUMENT_TOKEN_TO_BE_REPLACED

Vernon Dahmer, one of the most powerful racial justice leaders in the Piney Woods of southeast Mississippi, was killed in 1966 for his civil rights activism. Born on March 10, 1908, Dahmer’s parents were George and Ellen Dahmer of Forrest County, Mississippi. He graduated from … END_OF_DOCUMENT_TOKEN_TO_BE_REPLACED