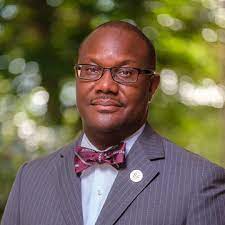 His areas of expertise are Ancient Africa with an emphasis on Egypt; Latin America with an emphasis on Brazil; and African-American history since 1865. Jackson was promoted to the rank of Associate Professor in three years and full Professor in only seven years at FAMU and was elected Chairman of the Department of History, Political Science, Public Administration, Geography and African American Studies at FAMU for four terms, a total of ten years. In 2015, he was appointed Associate Provost for Graduate Education and Dean of the School of Graduate Studies, Research, and Continuing Education at FAMU. He is currently Provost and Vice Chancellor of Academic Affairs at North Carolina Central University.

Dr. Jackson is author or editor of a number of scholarly articles including A Chief Lieutenant of the Tuskegee Machine: Charles Banks of Mississippi, published by the University Press of Florida in 2002; and Booker T. Washington and the Struggle Against White Supremacy: The Southern Educational Tours, 1908-1912 published in 2008 by Palgrave Macmillan. Also, Texas Tech University Press will be publishing Emmett J. Scott: Power Broker of the Tuskegee Machine, which he co-edited with Dr. Will Guzman, in 2023.

More important than his own personal accolades, Dr. Jackson is most proud of the fact that since becoming a professor at FAMU he has mentored and sent over thirty-five students off to doctoral programs throughout the country where they have earned the doctorate, mainly in History, and are now working as college and university professors. He received the Equity Award from the American Historical Association, the largest historical association in the country, for this accomplishment in 2014.

Dr. Jackson is married to Dr. Sheila M. Jackson, also an educator, and they have two children, David H. Jackson, III and Daja (Day-jah) Halima Jackson, both graduates of FAMU.

Booker T. Washington once called Charles Banks the “most influential businessman in the United States” and Mississippi’s “leading Negro Banker.” The son of former slaves, Daniel A. Banks, a farmer, and Sallie Ann, a housekeeper and cook, Banks was born on March 25, 1873, in … END_OF_DOCUMENT_TOKEN_TO_BE_REPLACED