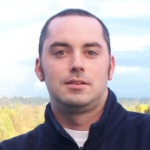 Robert Cruickshank is a Doctoral Candidate at the University of Washington in Seattle. His dissertation, “Our San Francisco: Race, Liberalism and the Reconstruction of Urban Space, 1950-1980” examines the role of African Americans and other groups in creating a neighborhood-based politics that restructured the way San Francisco was governed in an attempt to overcome decades of persistent racial inequalities. A recipient of the York-Mason Award for Best Graduate Student Paper on African Americans in the American West in the Department of History, Robert received his M.A. in history from the University of Washington in 2003, and his B.A., also in history, from the University of California at Berkeley in 2000. He currently lives in Monterey, California.

Thomas Fleming was a founding editor and columnist of one of the leading African American newspapers in California, the San Francisco-based Sun-Reporter. Born in Jacksonville, Florida in 1907, Fleming migrated to Chico, California in 1918 to live with his mother upon her divorce from Thomas’s … END_OF_DOCUMENT_TOKEN_TO_BE_REPLACED

The first African American to serve on the San Francisco Board of Supervisors, Terry Francois was a leading politician in that city for several decades in the second half of the twentieth century. Born in Louisiana in 1921, Francois served in the Marines during World … END_OF_DOCUMENT_TOKEN_TO_BE_REPLACED

An important force in local and state politics in the Oakland, California region, the East Bay Democratic Club (EBDC) was founded in the late 1940s to help produce black political self-determination through electoral politics by organizing grassroots coalitions of East Bay African Americans. Founded by … END_OF_DOCUMENT_TOKEN_TO_BE_REPLACED