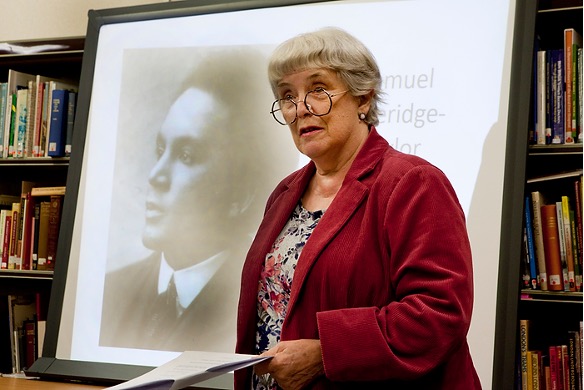 Married to Martin Anthony (Tony) Burrage, a violinist for 48 years with the Royal Liverpool Philharmonic Orchestra, with whom Hilary discovered the Samuel Coleridge-Taylor Piano Quintet, Op. 1., they both sought to promote the work of this distinguished black British composer.  Following location of the Opus 1 Tony spent several months realising the score for perfomance by his chamber group. and the work was heard for the first time in over a hundred years at the Liverpool Philharmonic Hall, on 7 November 2001.

Since that time many other Coleridge-Taylor works have been found and performed by these players and their colleagues, and some of this music, thanks to the Liverpool players and others across the UK, is now standard repertoire.

We will continue to promote the music of Samuel Coleridge-Taylor, and to value his example, insisting that we are all human beings of equal worth, whatever the colour of our skin.

Image Ownership: Public Domain In the article below Hilary Burrage, Executive Chair of the Samuel Coleridge-Taylor Foundation, a United Kingdom (UK)-based non-profit organisation, describes the composer and how she came to regard and preserve his work and legacy. It has taken three times the … END_OF_DOCUMENT_TOKEN_TO_BE_REPLACED