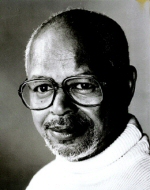 Douglas Barnett’s involvement in the American theatre began in 1961 and continues today. He was the Founding Director of the nationally acclaimed theatre Black Arts/West in 1969. A highlight of his career was serving as Company Manager for the National Tour of the Tony award winning play The River Niger for the Negro Ensemble company in 1973/74. Mr. Barnett has also worked for the Seattle Arts Commission and GeVa Theatre in Rochester, New York. During a long career he has acted in over thirty productions with five different companies including Black Arts/West, ACT, The Ensemble Theatre, and the Seattle Repertory Theatre. He has produced over forty productions including Dream on Monkey Mountain and Viet Rock. Directing credits include Big Time Buck White and Ebony Wood. He has written two plays and arranged, edited, and directed two productions of African American poetry. Additionally, he has authored articles for the Seattle Times, the Seattle Post Intelligencer, Negro Digest, Black World, and Historylink.org. His other interests include the dance, African American art, and women; one of the great wonders of this world.

Douglas Turner Ward, an actor, director and playwright is considered a living legend in the world of African American theatre. Although he has achieved much during his lifetime, his co-founding of the Negro Ensemble Company (NEC) in 1968, ranks as his greatest achievement. NEC has … END_OF_DOCUMENT_TOKEN_TO_BE_REPLACED

Lorraine Hansberry was one of the most significant and influential playwrights of the 20th Century. Her landmark play A Raisin in the Sun, which opened at the Ethel Barrymore Theatre in New York City, New York in 1959, was the first play written by an … END_OF_DOCUMENT_TOKEN_TO_BE_REPLACED

John Newington Conna was a pivotal figure in the early history and development of Washington State. Born enslaved near San Augustine, Texas in 1836, Conna was a free man by the time of the Civil War because he served in the 1st Louisiana Native Guards, … END_OF_DOCUMENT_TOKEN_TO_BE_REPLACED

Black Arts/West was Seattle’s first black theatre, eventually became a nationally known entity across the United States. Evolving out of the Civil Rights-Black Power movements of the 1960s, it was founded by Douglas Q. Barnett in 1969. Black Arts/West functioned as a three component program: … END_OF_DOCUMENT_TOKEN_TO_BE_REPLACED