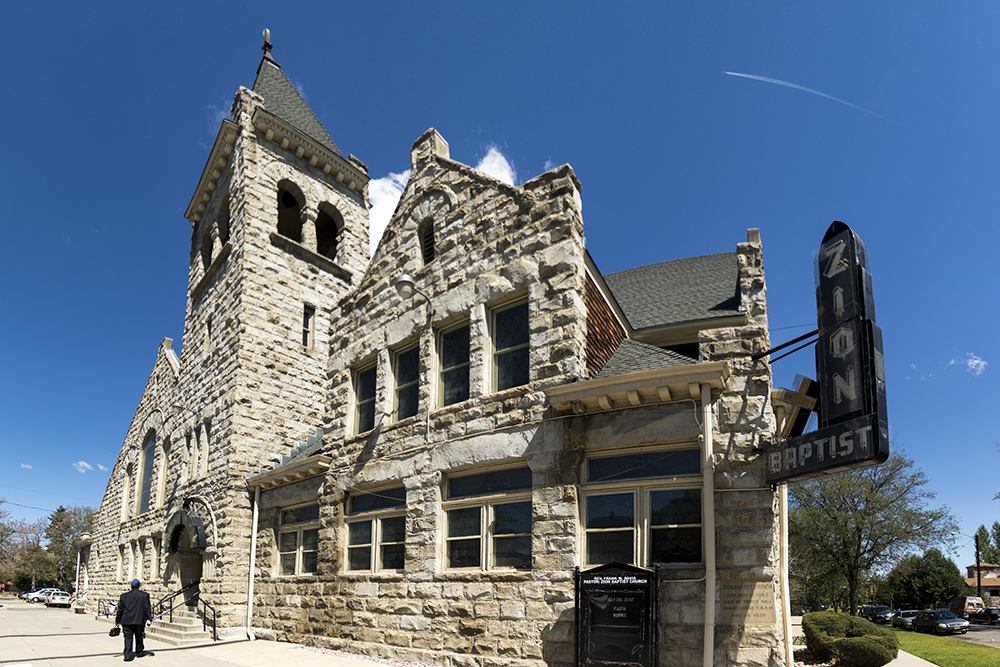 Zion Baptist Church was founded on November 15, 1865 by an intrepid group of black pioneers who settled in Denver, Colorado Territory when the city’s total population was less than 5,000 people. Among its founders was Barney Ford who would later become one of Denver’s most successful entrepreneurs.

Like all Denver residents at the time, these black church founders came from other states, although—for the vast majority of these black settlers—the South was their place of origin.  These church founders arrived in Colorado Territory with little wealth and limited education but they were determined to improve their lives in this frontier setting.  They felt church life was central to that improvement and thus founded one of the first black churches west of the Mississippi River.

In 1867 Zion Baptist purchased two lots located at 20th and Holladay (now Arapahoe) Streets and constructed their first house of worship.  Beginning in the late 1870s, the church began construction of a brick structure under the leadership of Reverend R.M. Duling.  The brick building was completed under the leadership of Reverend J.B. Fields in in 1883.  By this time the congregation had grown to 200:  about one-fifth of the total black population of Denver in 1880.  By the late 1880s the church began a prison ministry under its third minister, Reverend William Gray.  Zion’s ministry was one of the first in the nation at the time.

In September 1891 Reverend W.P.T. Jones requested and received permission for about 30 members of Zion to create a new church they called Central Baptist Church.  Nonetheless Zion continued to grow and by 1900 had over 400 members.  Reverend John E. Ford served as the church’s spiritual leader between 1899 and 1908.  His wife, Dr. Justina L. Ford, was the first black woman doctor west of the Mississippi River.  In 1911 Zion moved into its current church home when it purchased the edifice formerly owned by Calvary Baptist Church, a leading white church in the city.

In 1941 Reverend Wendell T. Liggins became the leader of the church and served in that capacity for 50 years until 1991.  Under his guidance Zion created new outreach programs such as the Stovall Care Center which was a senior care center and Liggins Towers, a housing complex.  By the end of Rev. Liggins’s tenure as pastor the church had grown to over one thousand members.  Reverend Frank M. Davis was appointed in July 1993 as Zion’s 25th pastor.  He continues in that role today as Zion plans its celebration of 150 years of service to Denver’s African American community.