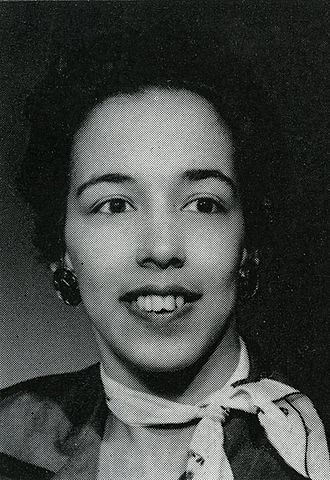 Yvonne Young Clark, a pioneer in the field of science and engineering, was born April 13, 1929, in Houston, Texas. Her father was Dr. Coleman Milton Young Jr., a medical doctor and surgeon. Her mother was Hortense Houston Young, a library specialist and journalist. Clark had one brother, Coleman Milton Young, III. Though a native of Houston, Clark grew up in Louisville, Kentucky.
Clark’s legacy is marked by many first-time achievements. She was the first African American to earn a Bachelor of Science degree in mechanical engineering at Howard University in 1951. She was the first woman to receive a Master’s degree in Engineering from Vanderbilt University in 1972; and, she was the first female faculty at the College of Engineering at Tennessee State University [TSU], endearing her with the title “TSU’s First Lady of Engineering”.

Throughout her youth Clark had a passion for fixing things. She would make repairs and rewire lamps in the family home. Her passion, however, was met with resistance when she was prohibited from taking a mechanical drawing class because she was female. Undeterred, she took an aeronautics course in high school and joined the Civil Air Patrol where she took simulated flying lessons.
Clark graduated from high school in 1945 at age 16. She studied at the Latin School for Girls in Boston for two years before enrolling in college. Clark was awarded a full scholarship to the University of Louisville in Kentucky but it was retracted after administrators realized she was African American. With the threat of litigation, the State of Kentucky paid for Clark to attend Howard University, a historically Black university in Washington D.C.

Clark excelled at Howard and was the only female engineering student among a graduating class of 300. Despite her academic honors, she was not allowed to walk with her male classmates for commencement. Instead, her degree was issued in the president’s office. After graduation, Clark routinely faced race and sex discrimination in the job market. She had been denied several jobs but eventually secured a post at Frankfort Arsenal Gauge Labs in Philadelphia. She also worked for RCA in New Jersey where she engineered electrical equipment with nearly 20 male colleagues.

In 1955, Clark relocated to Nashville, Tennessee and wedded William F. Clark, Jr., a biochemist instructor at Meharry Medical College. They had a son and daughter, Milton and Carol. Noting few industry jobs in Nashville at the time, Clark was hired as an engineering professor at TSU, resulting in a 55-year career in higher education. She utilized summer breaks to undertake engineering jobs. She worked on recoilless weapons at Frankfort Arsenal; on Saturn 5 engines where she identified hot spots for the NASA division in Huntsville, Alabama; and receptacles for returning moon specimens to Earth at the NASA Manned Spacecraft Center in Houston. She also conducted extensive studies on refrigerants including serving as chief researcher on a project “Experimental Evaluation of the Performance of Alternative Refrigerants in Heat Pump Cycles.”

Clark has received countless awards for her contributions to the engineering profession and education, including the “Mechanism of the Year” award for dedicated support to her students.

Yvonne Young Clark, 89, died January 27, 2019 at her home in Nashville. In furtherance of her legacy, the Y.Y. Clark Engineering Student Scholarship has been established at TSU to support female, Mechanical Engineering students.