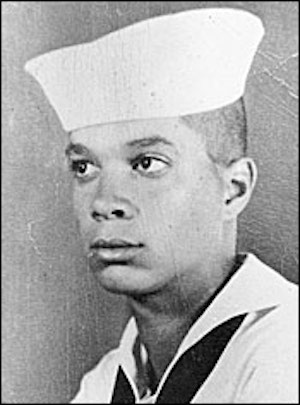 Samuel (“Sammy”) Leamon Younge Jr. was a 21-year-old civil rights activist who was shot to death on January 3, 1966 when he attempted to use a whites-only restroom at a gas station in Macon County, Alabama. He was a navy veteran studying political science at Tuskegee Institute

Younge was born on November 17, 1944 in Tuskegee, Alabama. His parents were educated professionals; Samuel Sr. was an occupational therapist, and Younge’s mother, Renee, was a schoolteacher. Unlike most black men in Macon County, Sammy Younge and his younger brother, Stephen (“Stevie”), grew up with middle-class privileges and comforts.

Between September 1957 and January 1960 Younge attended Cornwall Academy, a college preparatory school for boys in Great Barrington, Massachusetts, a town famous as the birthplace of W.E.B. Du Bois. Younge graduated from Tuskegee Institute High School in 1962 and enlisted in the U.S. Navy. Soon after his enlistment Younge served on the aircraft carrier USS Independence during the Cuban Missile Crisis when the vessel participated in the United States blockade of Cuba.  After a year in the navy, Young developed a failing kidney that had to be surgically removed.  He was given a medical discharge from the navy in July 1964.

Younge returned to Tuskegee and worked at the Tuskegee Veteran’s Hospital for a few months before entering the Tuskegee Institute in January 1965 as a freshman. In March 1965, Younge took part in the Selma-to-Montgomery Marches in support of voting rights.  That participation led to his joining the Student Nonviolent Coordinating Committee (SNCC) and the Tuskegee Institute Advancement League (TIAL), groups that led voter registration drives for African Americans and worked to help desegregate public facilities, recreational facilities, and schools.  Younge also traveled to Mississippi later in 1965 to help SNCC and the Mississippi Freedom Democratic Party register black voters.

Younge’s murder in January 1966 at a Standard Oil gas station by its elderly white night attendant, Marvin Segrest, came as he was involved in a voter registration campaign in Macon County.  It sparked a variety of protests.  Three days after his murder SNCC called a press conference in which it declared its opposition to the war in Vietnam. Younge’s death was highlighted as an example of fighting for freedom abroad that was denied at home. There were protests in Tuskegee when white county officials initially refused to indict Segrest and later when an all-white jury, in the overwhelmingly black county, took only one hour and ten minutes to acquit Segrest in his December 1966 trial.

SNCC and local black leaders used Younge’s death (in combination with the 1965 Voting Rights Act) to inspire a rise in black political participation in the region.  By 1970 the majority of office holders in Macon County and other predominately black central Alabama counties were African American.

Today Younge’s name is carved on the Civil Rights Memorial in Montgomery, Alabama, a tribute to the 40 people who were slain between 1954 (the year the U.S. Supreme Court banned school segregation) and 1968 (the year of Martin Luther King Jr.’s assassination).