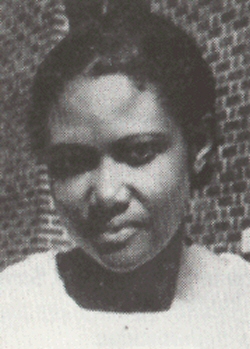 Roger Arliner Young, born in Clifton Forge, Virginia in 1889, was the first Black woman to earn a Ph.D. in zoology and to conduct research at the prestigious Marine Biological Laboratory at Woods Hole, Massachusetts. Young researched the anatomy of paramecium and the effects of radiation on sea urchin eggs.

Young enrolled at Howard University at the age of twenty-seven, intending to major in music. After struggling through a biology course with African American biologist Ernest Everett Just, she changed her major to that subject, earning a B.S. in 1923. Just hired her as an assistant professor at Howard while she attended graduate school. The following year, Young enrolled at the University of Chicago in Illinois part-time and published her first article on paramecium which achieved international recognition. She received her M.S in Zoology in 1926 and was elected to the honor society Sigma Xi.

Between 1927 and 1936 Young and Just worked together at Howard University and during the summers they conducted research at Woods Hole. While Just was in Europe, Young served as the substitute chair for Howard’s biology department. Upon his return to Howard in 1929, Young entered the Ph.D. program in biology at the University of Chicago. However, the pressures of her duties at Howard and her responsibilities to care for her invalid mother were counterproductive to her success. She failed the qualifying exam and returned to Howard where rumors of a romance with Just led to her dismissal in 1936. Young recovered from this low point to publish four articles between 1935 and 1938.

After leaving Howard, Young maintained ties with scientists she met at Woods Hole. One, V.L. Heilbrunn, recruited her to the University of Pennsylvania where she completed her Ph.D. in 1940. Between 1940 and 1953, she taught at North Carolina College and Shaw University, where she served as the Biology Department Chair. Young, affected by her mother’s death in 1953 and still under intense pressure as a solitary Black female scientist, had difficulty holding a job. She worked at various Black colleges until the late 1950s when she voluntarily committed herself to the Mississippi State Mental Asylum. After her release in 1962, Young lectured at Southern University until she died in 1964.