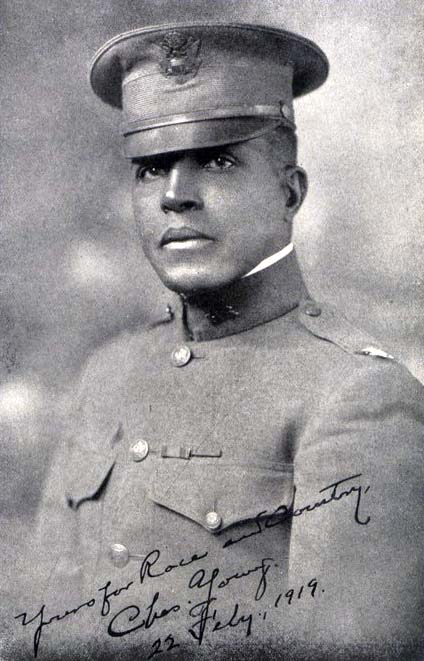 Colonel Charles Young enjoyed a decorated military career after his graduation from West Point Military Academy in 1889.  A Buffalo Soldier serving with the 9th and 10th Cavalry and the 25th Infantry, Young eventually became the first African American to achieve the rank of colonel in the United States Army.

Charles Young was born to ex-slaves in Mays Lick, Kentucky in 1864.  His father, Gabriel, served in the Union Army during the Civil War.  At the age of twenty, Charles Young was appointed to the United States Military Academy at West Point.  In 1889 he became the third African American to graduate from the Academy.

As a second lieutenant, Young’s assignment options were limited to the four Buffalo Soldier regiments then stationed in Nebraska, Utah, and Montana.  After serving five years on the “Western Front” with the 9th and 10th Cavalry Regiments, Young left to become a professor of Military Science and Tactics for four years, between 1894 and 1898, at all-black Wilberforce University in Ohio, where he became close, lifetime friends with fellow faculty member W.E.B. DuBois. Young, an accomplished linguist, taught Latin, Greek, French, Spanish and German as well as military science.

At the outbreak of the Spanish-American War, Young returned to active military service as a major in the 10th Cavalry of Buffalo Soldiers during U.S. operations in Cuba and the Philippines.  He was in command of the cavalry as they participated in the celebrated charge up San Juan Hill.  In 1903, Young was appointed superintendent of the Sequoia and General Grant National Parks in California.  He was the first African American to hold the post of National Park Superintendent.

In 1916, Young led the 10th Cavalry again when his regiment was assigned to General George Pershing’s “punitive expedition,” which attempted to capture Mexican rebel leader Francisco “Pancho” Villa.  After the campaign, Young was promoted to Lieutenant Colonel.

When the United States entered World War I in 1917, many assumed Young, the highest ranking African American in the Army, would be given a prominent command.  Instead, he was declared physically unfit for duty due to high blood pressure.  After a 500-mile horse ride from Ohio to Washington, D.C. to prove his fitness, Young was returned to active duty in 1918 and promoted to colonel.  He was later appointed United States military attaché to Liberia.  Colonel Charles Young died in 1922 while visiting Lagos, the capital of British Nigeria.  He was interred in Lagos with full honors by British troops.  However his body was returned to the United States in 1923 and interred at Arlington National Cemetery.  The eulogy was delivered by his friend W.E.B. DuBois.