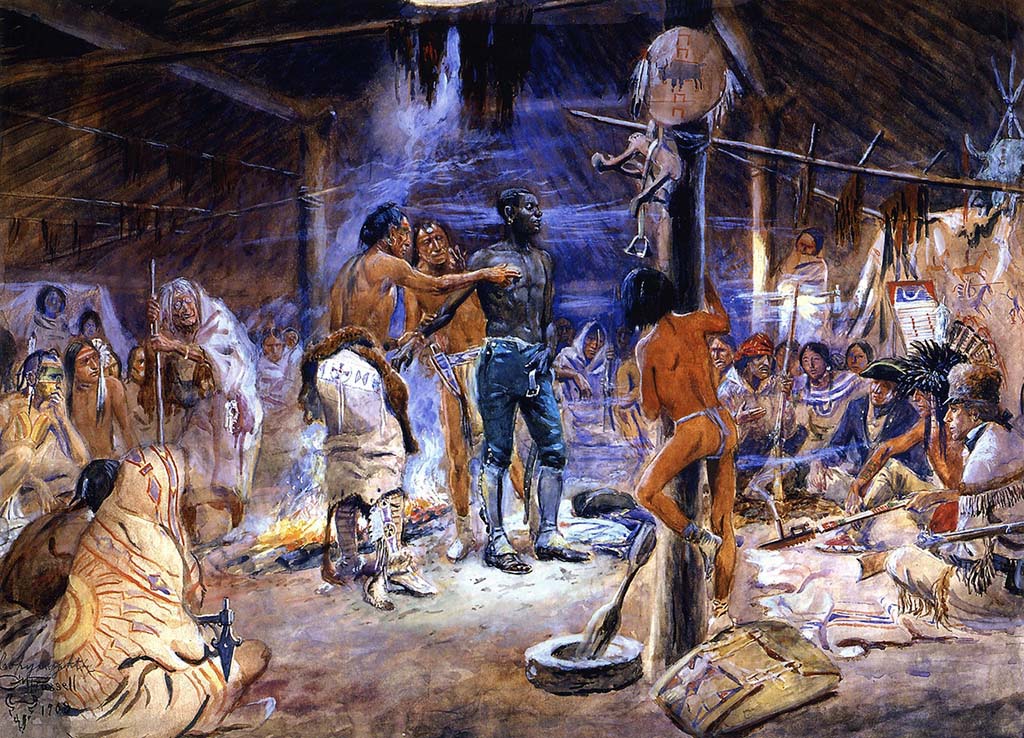 York was an African American slave best known for his participation in the (Meriwether) Lewis and (William) Clark Expedition of 1804-1806. York was born in Caroline County, Virginia in 1770.  York, his father, mother (Rose), and younger sister and brother (Nancy and Juba) were all owned by the Clark family of Caroline County. York at 14 became William Clark’s slave, passed down by a will from Clark’s father.  When the Clark family moved to Kentucky in 1784 York was Clark’s “manservant,” a position he held into adulthood. When Clark and Meriwether Lewis selected men to go on what would be known as the Lewis and Clark Expedition, commissioned by President Thomas Jefferson shortly after the Louisiana Purchase in 1803, Clark selected York to accompany him.

York was mentioned in Clark’s diary which chronicled their travels from St. Louis up the Missouri River and down the Columbia River to the Pacific Coast. Clark noted that York, unlike many of the explorers with them, could swim. Because of that ability York was often assigned to collect greens along the Missouri River to feed the Expedition. York was also given the responsibility of caring for Sergeant Charles Floyd, the sole member of the Expedition who died along the way.

In the autumn of 1804 when the Expedition reached what is now South Dakota and made contact with local Native American tribes, the Arikaras were astonished to see a black man. York, who was described as large and had curly hair, soon became the object of their attention.  The Arikaras crowded around him touching his skin and hair and found it difficult to understand why his color did not come off.

The Mandans in what is now North Dakota reacted similarly to York and because of his dark skin called him “Great Medicine.”  In 1805, during the Expedition’s winter stay in North Dakota, Clark used York to entertain the Native people.  York’s entertainment value continued as the Expedition headed west into present-day Montana and encountered the Shoshones among other Indian people.  His presence may have persuaded the Shoshones to trade badly need horses to the Expedition in exchange for manufactured goods.  By the time the Expedition reached the coastal Pacific Northwest, however, York’s novelty as a black man ended among the local Indians who had been trading with the British and Americans for decades and had often encountered black crew members of the ships of both nations.

Although still enslaved to Clark, York did enjoy certain privileges.  There is little evidence that his work assignment differed from those of the white male members of the Expedition.  York was designated one of the Expedition hunters and was permitted to carry a firearm. He was also given a vote when the decision was made to build Fort Clatsop, the structure where the Expedition spent the winter in 1805-1806.

When the Expedition returned to St. Louis, York was publicly admired and appreciated but he received few rewards.  Other Expedition members received double the pay that was initially promised them and land for their services. York asked for his freedom after the Expedition ended in 1806 but Clark refused his request.  Years afterward York not only remained enslaved, he was no longer Clark’s body servant and was instead hired out for odd jobs, often being taken to various work locations in Kentucky and Tennessee.  York married a slave woman after the Expedition returned but lost contact with her in 1811 when she was taken to Mississippi by her new owner, effectively ending the marriage.

Accounts of York’s death are unclear but the strongest explanation is that he died from cholera in Tennessee sometime in 1832.