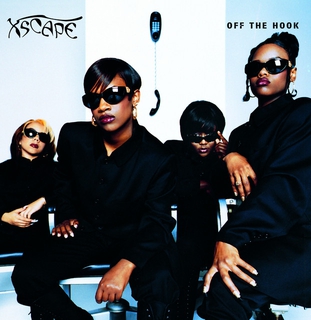 Xscape is a female R&B group from Atlanta, Georgia. The group includes Tameka “Tiny” Cottle, Kandi Burrus, LaTocha Scott, and Tamika Scott. Xscape were established in 1992. The group originally included another member, Tamera Coggins-Wynn who left in 1993. Producer Jermaine Dupri Mauldin “discovered” the group and signed them to his record label, So So Def. In 1993, the group released their debut album Hummin’ Comin’ at ‘Cha. The album included the singles “Just Kickin It,” “Understanding,” Love on My Mind,” and “Tonight” and sold more than one million units, thus was certified platinum.

In 1995, Xscape released their second album, Off the Hook which included the singles “Feels So Good,” “Can’t Hang,” “Who Can I Run To,” and “Do You Want It.” This album also sold a million units and was certified platinum. The album won the 1996 Soul Train Music Award for Best R&B/Hip-Hop Album. In 1998, Xscape released their third studio album, Traces of My Lipstick. This album features the singles, ‘The Arms of the One Who Loves You,” “My Little Secret,” and “Softest Place on Earth,” and became their third million selling album. They were the first female rap group to sell a million units of their first three albums.

After the release of Traces of My Lipstick, the group went on a hiatus while members pursued solo careers. In 2005, the group briefly reunited and included a new member, Kiesha Miles replacing member Kandi Burrus. The group originally planned to release a fourth studio album called Unchained, but the album was never released. 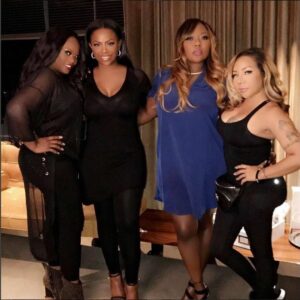 The group broke up again in 2006 and returned to promoting their solo careers. In 2017, Xscape reunited by performing together at the 2017 BET Awards. Despite the reunion, Xscape decided to not record new music as individual members continued to pursue new solo endeavors. Three members of the group Tameka “Tiny” Cottle, LaTocha Scott, and Tamika Scott decided to rename the group XSCAP3. In 2018, they created a new record label named XSCAP3 Entertainment and later that year released an extended play (EP) compact disc called Here for It. It included the singles “Dream Killa” and “Wifed Up.” The EP failed to sell at least 500,000 units.

On May 8, 2021, Xscape appeared on the webcast series Versuz with female R&B group SMV (Sisters with Voices) in Atlanta, Georgia. Both groups performed their hit songs on the show which was a contest between the groups. SMV was declared the winner by the Billboard scoreboard. Xscape is still active in the entertainment business as of 2022.