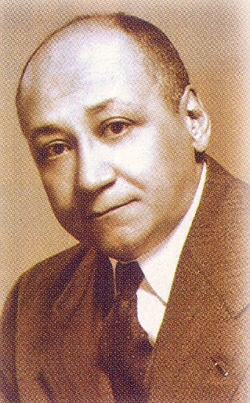 Louis Tompkins Wright, medical researcher, war hero and political activist, was born to former slaves in La Grange, Georgia on July 23, 1891. He earned a bachelor’s degree from Atlanta’s Clark University in 1911 and a medical degree from Harvard University Medical School in 1915. Wright’s activism began at Harvard where he missed three weeks of medical school to join NAACP picket lines protesting The Birth of a Nation. Wright returned to his studies, however, and graduated fourth in his class in 1915.

Louis Wright served in France as a physician and Captain in the U.S. Army in World War I. There he successfully implemented life-saving treatments and suffered exposure to poison gas that led to both a Purple Heart and a lifelong respiratory illness. Upon his return to the United States he moved to New York City, New York where in 1919 he became the first African American appointed to the surgical staff at Harlem Hospital. Wright protested the dilapidated conditions of the hospital, raised its patient care standards, improved the professionalism of its staff, and brought the institution to national eminence. He began publication of the scholarly Harlem Hospital Bulletin and established the hospital’s medical library in 1934. During the 1930s Wright authored columns for the NAACP magazine Crisis, where he challenged the contention that biological factors caused African Americans to harbor more syphilis and infectious diseases than the general population. For his work with the NAACP, Wright received the Spingarn Medal in 1940.

Wright continued to serve on the staff of Harlem Hospital until 1949 in various capacities, including directory of the department of surgery and president of its medical board. Wright headed the team that first used Aureomycin. He became an expert in the treatment of head injuries and introduced the intradermal method of vaccination. Wright also founded the cancer research center at Harlem Hospital known as the Harlem Hospital Cancer Research Foundation.

On October 8, 1952, Louis Thompkins Wright died in New York City from tuberculosis. He was 61 at the time of his death.