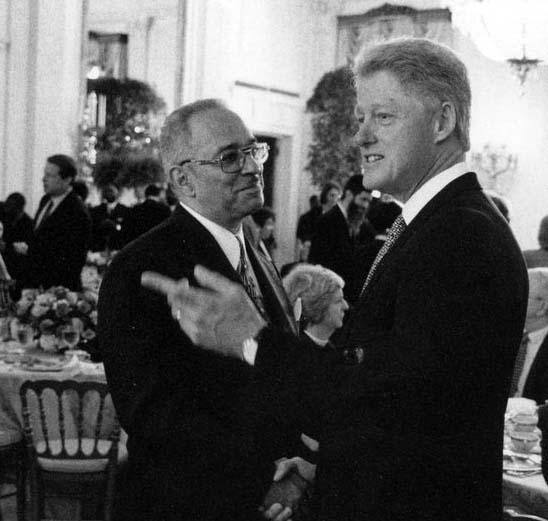 Reverend Dr. Jeremiah A. Wright, Jr. was born in Philadelphia, Pennsylvania on September 22, 1941 to Jeremiah A. Wright, Sr., a Baptist minister who served as pastor of Grace Baptist Church in Germantown, and Mary Henderson Wright.  Wright completed primary and secondary school in that city and in 1959 enrolled in Virginia Union University in Richmond.  After seven semesters, Wright left VUU and joined the United States Marine Corps in 1961.  He served as a private first class in the 2nd Marine Division before receiving a transfer from the USMC into the United States Navy to become a cardiopulmonary technician.  Wright’s most famous patient was President Lyndon Baines Johnson who underwent gall bladder surgery in 1966 at Walter Reed Hospital in Washington.

On March 1, 1972, Reverend Dr. Jeremiah A. Wright, Jr. became Pastor of Trinity United Church of Christ (TUCC) in Chicago.  In the early years of his pastorate, Wright adopted the motto: “Unashamedly Black and Unapologetically Christian,” while reaching thousands of urban blacks in the church’s South Side neighborhood.  During Wright’s tenure as pastor, the membership of TUCC increased from 87 to over 8,000.

As head of TUCC, Wright lectured at seminaries and universities throughout the world.  He is recognized as a leading theologian and scholar, authoring and coauthoring several Black Liberation Theology books and articles. Wright also taught at several seminaries such as Chicago Theological Seminary and the Garrett and Evangelical Theological Seminary. He served on the Board of Trustees of Virginia Union University, the Chicago Theological Seminary, and the City Colleges of Chicago. Wright was also a board member of other religious, civic, and educational organizations, such as Evangelical Health Systems, Black Theology Project, Center for New Horizons, and Malcolm X School of Nursing at Malcolm X College in Chicago.

During the 2008 Presidential campaign, Rev. Wright made national headlines when media outlets reported and aired clips of some of his older sermons.  In these segments, he remarked that the terrorist attacks on September 11, 2001 were retribution for decades of U.S. imperialism, that HIV/AIDS was developed to kill black people, and that because of white America’s historic mistreatment of African Americans, God would damn the nation.  His comments created a firestorm of protest because Wright was the acknowledged spiritual mentor and pastor of leading Democratic presidential candidate Barack Obama.  Political pundits criticized Wright’s comments and his black liberation theology ministry in general as racist and anti-American teachings, thus forcing Obama, a 20 year member of TUCC, to denounce the sermons and distance himself from his pastor.  Rev. Wright retired from TUCC in March 2008.

In his private life, Wright is married Ramah Reed Wright, and they have four daughters, one son, and several grandchildren.   The Wrights continue to live in Chicago.