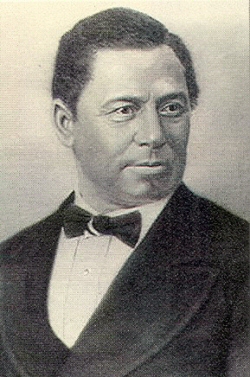 Born in Washington, D.C. on January 16, 1819, James Wormley was the son of free-born citizens Lynch and Mary Wormley. As a young boy, Wormley’s first job was working with his family’s hackney carriage business. This job would help Wormley gain skills and an appreciation for hard work involved in business ownership which he put to good use in post-Civil War Washington.

After owning a successful restaurant, Wormley decided to purchase a hotel in 1871 which he called the Wormley House. Located near the White House, at the southwest corner of 15th and H Streets Northwest, Wormley House soon became popular among the wealthy and politically prominent in the nation’s capital.  Wormley’s experience as caterer, club steward, and traveler in Europe helped him to perfect his culinary skills while his keen eye for detail ensured that his hotel guests were satisfied during their stay. The hotel was most famous for its well-managed rooms, early telephone, and the dining room where Wormley served European-style dishes.

Wormley also became active in Washington, D.C. community politics. On July 21, 1871, Wormley led a successful campaign to persuade Congress to fund the first public school for the city’s African Americans. The school, named after Wormley, was built in Georgetown at 34th and Prospect Streets.  Despite Congress’s allocation, local politics delayed the opening of the school until 1885.

The Wormley house, however, is most prominently identified as the site of a series of secret meetings that began in January 1877 between representatives for Republican Presidential candidate Rutherford B. Hayes and Democrat Presidential candidate Samuel J. Tilden over the contested presidential election of 1876. The representatives finally concluded their deliberations on February 26, 1877 producing the infamous Compromise of 1877 which led to the removal of federal troops from the South and the end of Reconstruction with its guarantees of black political participation.  It is unclear if Wormley even was aware of the nature of the deliberations taking place in his hotel.

James Wormley died on October 18, 1884 in Boston, Massachusetts after an operation for kidney stones at Massachusetts General Hospital. He did not live long enough to see the opening of the school he helped create.