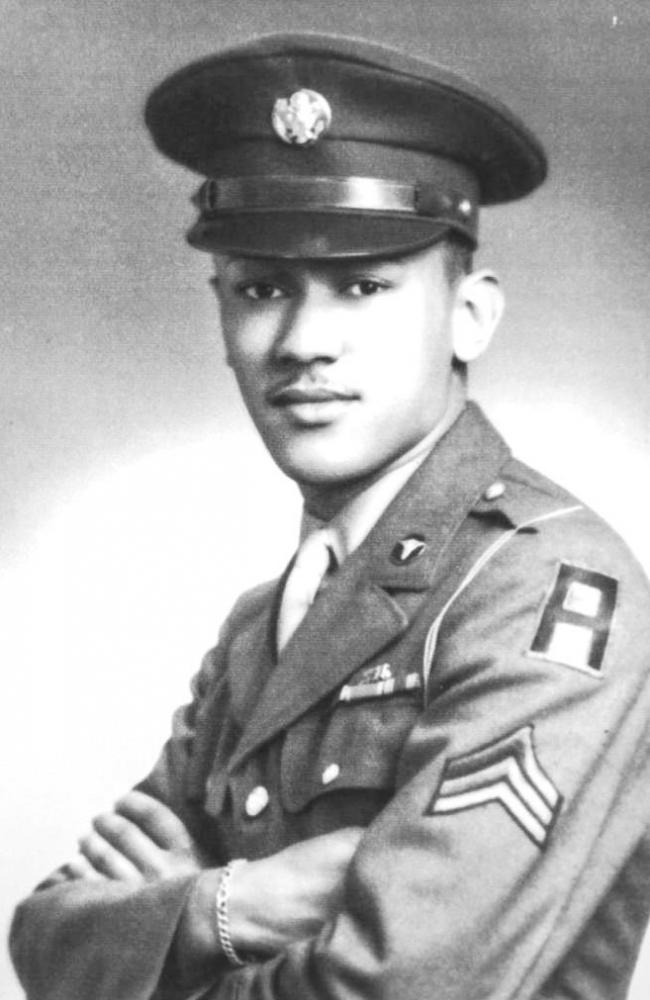 World War II hero Waverly B. “Woody” Woodson was born August 3, 1922 in Philadelphia, Pennsylvania, the son of Waverly B. Woodson Sr., a postal carrier. The historical record reveals nothing about his mother. A pre-med student at Lincoln University when World War II started, Waverly left during his sophomore year to enlist in the U.S. Army on December 15, 1942.

Despite completing Officer Candidate School in Anti-Aircraft Artillery (AAA), he was informed there were no positions for blacks as officers in AAA. He was instead steered into medic training and was assigned to the racially segregated 320th Barrage Balloon Battalion, a black unit that specialized in strategically positioning balloons in battle areas to destroy enemy aircraft.

On D-Day, June 6, 1944, the transport boat (LCT) that took him and others of his battalion to Omaha Beach was blasted by German fire, and Woodson, like many other soldiers, suffered injuries. Ignoring his own shrapnel wounds, Woodson made it ashore where he set up a medical station and for the next 30 hours dragged maimed soldiers from the killing zones to receive treatment.  Woodson bandaged wounds, gave injections, handled blood plasma, extracted bullets, performed an amputation, and even resuscitated four British drowning victims. After three days aboard a hospital ship where his own wounds were treated, he asked to be sent back to the battlefield.

After the news media learned of his selfless actions upon his return home, he was interviewed on radio and questioned by newspaper reporters. The Pittsburgh Courier hailed him “No. 1 Invasion Hero,” and Stars and Stripes, the official U.S. military publication, declared him one of the medics who “covered themselves in glory on D-Day.”  The Courier and other black newspapers said he deserved the nation’s highest military award: the Medal of Honor.

In the racially segregated armed forces of the United States of that era black soldiers were demonstrably less likely to receive coveted recognitions of valor. Woodson was a case in point. Despite Woodson’s media attention, and though there were white officers, such as General John H.C. Lee, who believed Woodson should receive the Medal of Honor, he was instead awarded the Bronze Star (fourth-highest honor), along with a Purple Heart.

Woodson returned to Lincoln University and graduated in 1948. Later he earned a medical technology degree from Franklin Institute in Philadelphia and returned to active duty during the Korean War. Woodson married Joann Katharyne Snowden in 1952 and the couple had three children. Woodson then began a career at Walter Reed Army Medical Center in Bethesda, Maryland, as director of the morgue.  While there he taught anatomy classes.  In 1990 Woodson retired as supervisor in the Clinical Pathology Department at the National Institutes of Health in Bethesda, Maryland.  Waverly Bernard Woodson died on August 12, 2005 at the age of 83. He was buried in Arlington National Cemetery.