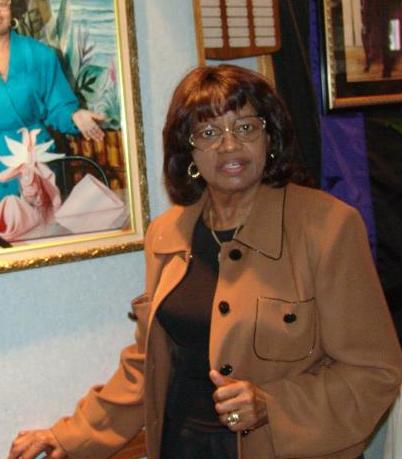 Dubbed the Queen of Soul Food, Sylvia Woods was the owner of Sylvia’s Restaurant in Harlem, New York. She was born Sylvia Pressley in Hemingway, South Carolina on February 2, 1926. Her father died when she was three days old, and she was raised by her mother and grandmother. Enterprising and hardworking throughout her life, she earned her beautician’s license at night while attending junior high school. While a teenager Pressley moved to New York City. Childhood sweetheart Herbert Woods followed her, and they were married in 1944.

Living in Harlem and tired of commuting to the Brooklyn factory where she worked, Woods began working at Johnson’s Luncheonette in central Harlem in 1954.   Seven years later she and her husband purchased the luncheonette for $20,000, 10% of which came from her savings, and the rest borrowed from her mother, who mortgaged her South Carolina farm.  In 1962 she changed the name of her business to Sylvia’s.  Although the restaurant was highly regarded by Harlem residents and visiting performers such as James Brown, its first major publicity to the outside world came with Gael Greene’s 1979 New York magazine piece “Harlem on My Mind.”

From that point Sylvia’s Restaurant became a destination for tourists from around the world. Sylvia’s boasted a host of customers prominent in entertainment and politics including Roberta Flack, Chris Rock, Sidney Poitier, Quincy Jones, Diana Ross, Grandmaster Flash, and Muhammad Ali.  Harlem Congressman Charles Rangel was a regular customer by the 1980s and in 1993 he persuaded President Bill Clinton to visit.  The Clintons subsequently invited Woods to the White House their last Christmas in office (2000), and former President Clinton spoke at her memorial.  In 2007 Senator Barack Obama of Illinois first visited with Al Sharpton.

Sylvia Woods stepped down from active management of the restaurant at age 80, but ever industrious, continued to work behind the counter for some time. She developed Alzheimer’s disease during the last several years of her life and died in her Mount Vernon, New York home on July 19, 2012. She had been scheduled to receive an award the night before from New York Mayor Michael Bloomberg at the mayoral residence in commemoration of the fiftieth anniversary of Sylvia’s. She was preceded in death by husband Herbert, who passed in 2001.  She was survived by her two sons, two daughters, eighteen grandchildren, five great-grandchildren, and two great-great-grandchildren.