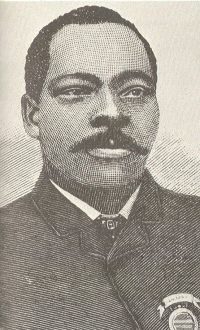 Granville T. Woods was a prominent inventor and electrical engineer who developed inventions that were awarded 27 patents by the U.S. Patent Office between 1884 and 1903.  Because of his significant electrical inventions he is known as the “Black Edison.”

Woods was born on April 23, 1856 in Columbus, Ohio. He attended school until he was 10 years old and then, as was typical of the era, he left school to start work.  Employed in a mechanic’s shop, he developed a fascination with railroad equipment.  Woods, an avid reader and astute learner, began to focus all his spare time and attention to mastering electrical engineering.  At the age of 20 he enrolled in a technical college and trained for two years in electrical and mechanical engineering.  After graduation, with no prominent jobs prospects in Ohio, he worked as an engineer on a British steamer which allowed him to travel the globe.  Woods eventually settled Cincinnati, Ohio where he formed the Woods Electric Company.  His decision to become an independent entrepreneur stemmed in part because of his difficulty in finding work.

Although his first patent came in 1884, by 1887 Woods developed the most important of his inventions, the Synchronous Multiplex Railway Telegraph which allowed communication between moving trains and train depots.  One year later he developed a system for overhead electric conducting which helped power locomotives.  In 1889 he filed his first patent for an improved steam-boiler furnace.

Woods competed with more prominent inventors of the era including Thomas Edison who claimed invention of the multiplex telegraph and filed a lawsuit to support his claim.  Woods won the legal challenge prompting Edison to offer him a prominent position in the engineering department of Edison Electric Light Company in New York.  Woods declined the offer, preferring to maintain control over his inventions.

Granville T. Woods died in Cincinnati in 1910 at the age of 54  Over the course of his lifetime he held 27 patents including a dozen for inventions which made electrical railways safer and more efficient.