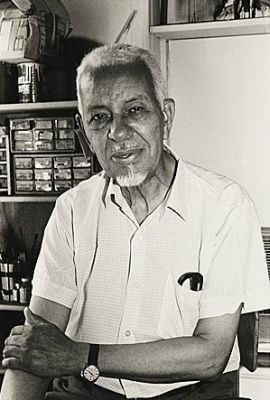 African-American artist and art educator Hale Woodruff was born to George and Augustin Woodruff on August 26, 1900 in Cairo, Illinois. After his father died, Woodruff and his mother moved to East Nashville, Tennessee. Woodruff showed an early interest in art and was the cartoonist for his high school newspaper. In 1920, Woodruff entered the Herron Art School in Indianapolis, earning money as a political cartoonist for The Indianapolis Ledger.

After a brief move to Chicago, Woodruff returned to Indianapolis in 1923, where he developed one of the country’s most successful black branches of the Young Men’s Christian Association (YMCA).  He continued to paint and met such notables as Walter White, W.E.B. DuBois, and Dr. John Hope, the president of Morehouse College and later Atlanta University. Through his successes in local art competitions and displays in exhibits, Woodruff’s work became increasingly popular.

Woodruff travelled to Paris, France in 1928 with the financial backing of supporters in Indianapolis. In Paris he attended Académies Scandinave and Moderne, and studied under Henry Ossawa Tanner, a leading contemporary black artist.  While there he explored the impact of African art on twentieth-century modern art.

Woodruff returned to the United States in 1931 to teach at Atlanta University and established the university’s art department. In 1936, Woodruff studied under famed muralist Diego Rivera in Mexico, drawing parallels between Mexican art and African art. In 1942, Woodruff developed the Atlanta University Art Annuals, a national annual exhibition of the works of black artists that ran successfully until 1970, and established the university’s permanent collection of African-American art. In 1943 he received the Julius Rosenwald Foundation Fellowship for creative painting, moving to New York City with his wife. Three years later he was offered a teaching position at New York University, remaining there until his retirement in 1968.

During his years in Atlanta and New York, Woodruff continued with his work, completing three mural series: The Negro in California History (1949), a collaboration with Charles Alston, on display at the Golden State Mutual Life Insurance Company in California; The Amistad Mutiny (1939), displayed at Talladega College; and his most important work, The Art of the Negro (1951), displayed at Clark Atlanta University Art Galleries, which traces the history of African art and its impact on modern art.

Hale Woodruff, a member of Sigma Pi Phi fraternity, died in New York City on September 6, 1980 at the age of 80.