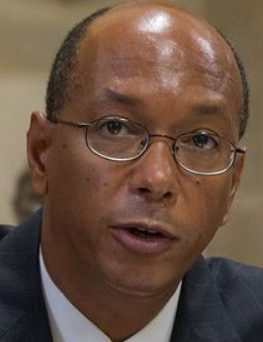 Robert A. Wood is a diplomat who has spent his career in public affairs, helping to shape the image of the United States, and in roles that guide the country’s relations with multilateral organizations.

Wood received his bachelor’s degree from the City University of New York, before joining the United States Foreign Service through the U.S. Information Agency in 1988. During his early career as a foreign service officer, Mr. Wood served in several postings at the State Department in Washington, D.C., including as a public affairs advisor for the Bureau of African Affairs, as a special assistant to the Under Secretary for Public Diplomacy and Public Affairs, and in several positions dealing with the Balkan nations, which include Albania, Bosnia & Herzegovina, Bulgaria, Croatia, Greece, Macedonia, Montenegro, Romania, Serbia, and Slovenia.

In these last three assignments particularly, Wood played a leadership role in ensuring that the United States had strong relations with multilateral organizations within the United Nations’ system, as well as within the European Union. In 2013 this leadership in promoting multilateral dialogue and incorporation was recognized by President Barack Obama who nominated Wood for rank of ambassador while he served as United States representative to the Conference on Disarmament (CD) and U.S. special representative for Biological and Toxin Weapons Convention (BWC) Issues based in Geneva, Switzerland.

After confirmation by the U.S. Senate on July 21, 2014, Ambassador Wood took up his new post. In his dual roles, he is responsible for moving forward the administration’s agenda of seeking “to promote peace and security in a world without nuclear weapons.” As part of this nuclear disarmament agenda, he also leads U.S. efforts to promote the Nuclear Non-Proliferation Treaty, or NPT, review process, including issues related to the NPT’s Article VI which addresses nuclear disarmament.

Ambassador Wood is married to Gita Wood, and they have one son, Jonathan.