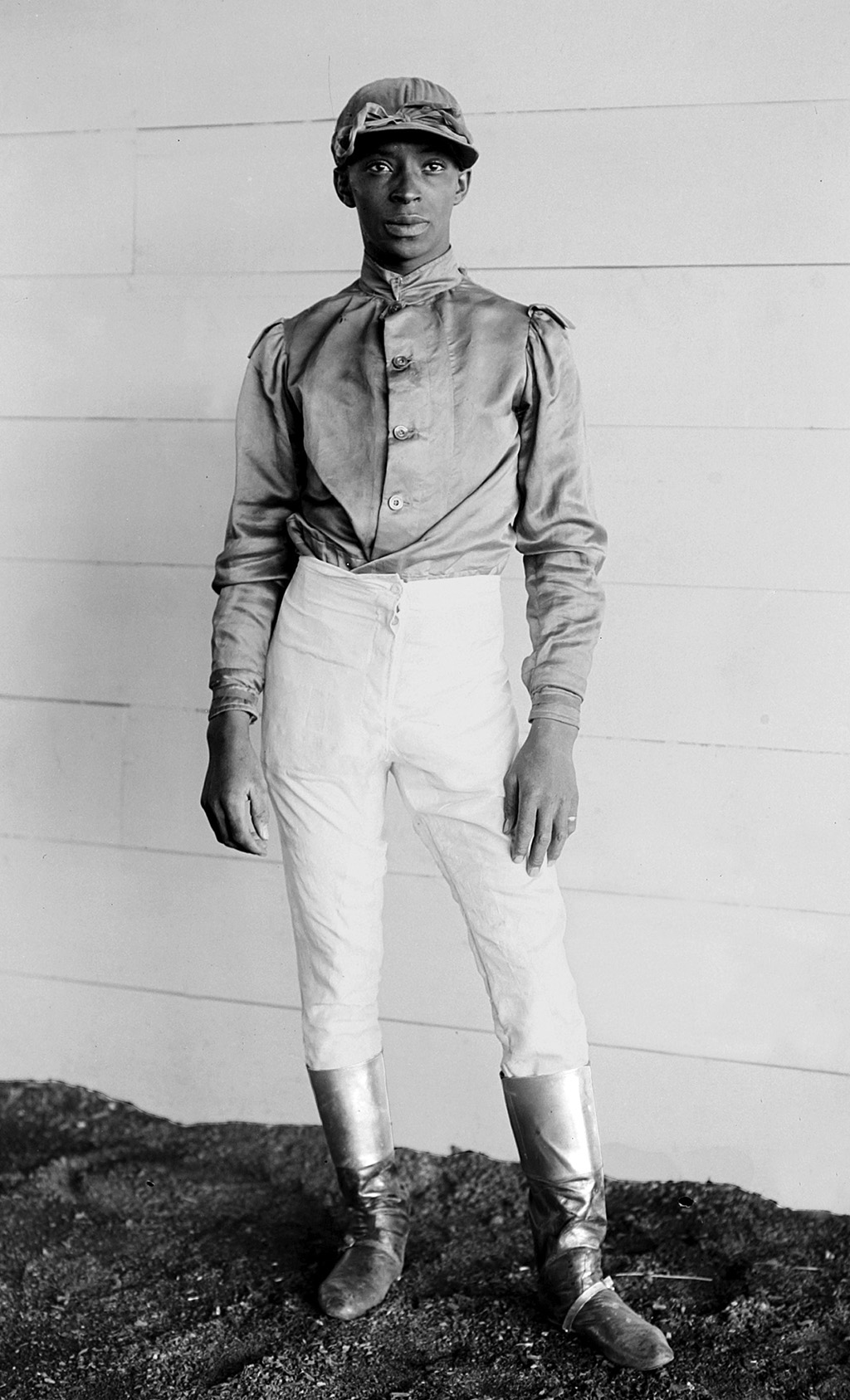 Jimmy Winkfield, born on April 12, 1882, was a professional jockey and horse trainer who became famous in the early twentieth century.  Winkfield, the youngest of seventeen children, was born in Chilesburg, Kentucky, a town just outside of Lexington.  As a child, he had a routine that included performing chores on the farm where his father was a sharecropper and overseeing the thoroughbred parades down the country roads. He and his family moved to Cincinnati in 1894.

On August 10, 1898, Winkfield rode his first race. Atop Jockey Joe at Chicago’s Hawthorne Racetrack, he raced his horse out of the gate and rode across the path of the three inside horses, in an effort to get to the rail. This aggressive behavior did not go over well with racetrack officials, and he earned a one-year suspension.  Winkfield learned from his mistake and on September 18, 1899, won his first race.  Six months later, he rode for the first time in the Kentucky Derby.

In 1901, Winkfield captured his first Kentucky Derby title astride a horse named Eminence. He went on to win 161 races that year, including key victories in the Latonia Derby on Hernando and in the Tennessee Derby, where he rode Royal Victor. While these were spectacular accomplishments, he returned to the Kentucky Derby in 1902 and won again, this time riding Alan-a-Dale.

In 1903, Winkfield narrowly missed winning a third consecutive Derby. Had he accomplished this feat, he would be the first (and only person) to have ever done so.  Riding a thoroughbred named Early, the odds-on favorite, Winkfield, took a 1 1/2-length lead, but his mount slowed in the stretch and lost by three-quarters of a length.  Winkfield called the loss the worst of his career.

Blacklisted after he dishonored a contract with one horse owner by riding for another, Winkfield accepted an offer to race in Russia, where he rose to fame once again. In Russia, he won the Emperor’s Purse, the Moscow Derby twice and the Russian Derby three times. In Germany, Winkfield won the Grand Prix de Baden. In Poland, he won the Poland Derby twice, and in France he won the Prix du President de la Republique.

Winkfield continued to race throughout Europe while living in Moscow.  When the Communist Party came to power in Russia in 1919, horse racing was outlawed.  Winkfield, by then a trainer, led 260 horses, fellow trainers, and owners overland to Poland during the winter of 1920.  During this arduous journey, the group survived by eating some of their horses on the way.

Winkfield married twice. His first wife, Alexandra, was a Russian baroness who died in 1921. They bore a son, George, who died in 1934. His second marriage was to a French woman named Lydia de Minkiwitz, who died in 1958. The couple had two children–a son, Robert, and a daughter Liliane.

Jimmy Winkfield died on March 23, 1974 in Maisons-Laffitte, France. His family and supporters lobbied for his admission to the Thoroughbred hall of fame, so he could join two other African-American jockeys who had already been honored there. On August 9, 2004, Winkfield was inducted into the National Museum of Racing and Hall of Fame in Saratoga Springs, New York. The award was presented to his daughter Liliane Winkfield Casey.