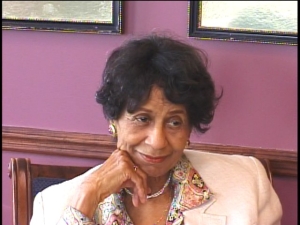 Margaret Bush Wilson, prominent 20th Century Civil Rights leader, was born January 30, 1919 in St. Louis, Missouri to James and Margaret Bush; her father was a real estate agent and her mother a teacher.  Her passion for the Civil Rights movement was instilled early; both of her parents were involved with the St. Louis branch of the National Association for the Advancement of Colored People (NAACP).  After graduating from Sumner High School in St. Louis in 1935, Bush received a scholarship to attend predominantly black Talladega College in Alabama but unexpectedly lost her scholarship after being re-interviewed by an official.  Incensed by this injustice, George Brantley, her principal, called on the faculty to raise funds to replace the scholarship.  (This act of good faith helped to influence her charitable work later in life.)  She graduated from Talladega in 1939 with a degree in economics.

Margaret Bush returned to St. Louis and soon became linked to major civil rights efforts. She became the second woman to attend the law school at Lincoln University.  This school was created after the Supreme Court case Gaines v. Canada (1938), which ruled that the state of Missouri must provide an equal law school after denying a black student admittance into the University of Missouri Law School.  After passing her bar exam, Bush became the second black woman to become a practicing attorney in the state of Missouri and in 1946 established a law firm with Robert Wilson, whom she married in 1944.  Her first influential role came in 1948 with the nationally prominent Shelley v. Kraemer case in 1948.  Wilson’s father aided the Shelleys, an African American family, in purchasing a home in 1946 from which they were later removed because of racially restrictive covenants.  Wilson chaired the Black Real Estate Brokers Association in St. Louis as a real estate lawyer.  The Association along with the local and national NAACP initiated the lawsuit and won the case with a 1948 U.S. Supreme Court ruling which declared the covenants legally unenforceable.

In 1962, Margaret Bush Wilson, now an NAACP activist, became President of the Missouri conference of Association branches.  Throughout this time she was successful in promoting integration and equal employment opportunities in Missouri and the Midwest.  In 1975 she became the first woman to serve as Chair of the national board of the NAACP.  Her well-publicized conflict with Rev. Benjamin Hooks, the NAACP’s Executive Director, led to her suspending Hooks in 1983 after he failed to cooperate with an audit of the organization. Soon after that incident, Wilson lost her bid to be re-elected chair of the NAACP and left the organization at the end of 1983.

Margaret Bush Wilson continued serving the civil rights movement with her role as chairman for various colleges, including Talladega and corporations such as the Mutual Insurance Company of New York.  Wilson passed away at 90 years of age on August 11, 2009 in her father’s home in St. Louis, Missouri.