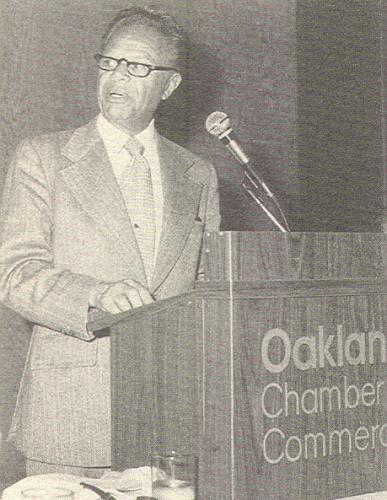 Lionel Wilson, lawyer, judge, and politician, was born in New Orleans, Louisiana on March 4, 1915 to Jules and Louise Wilson.  In 1918 the family moved to Oakland, California, where his parents believed a smaller and less-noticeable black community would afford them greater freedoms and less discrimination.  Following his elementary schooling Wilson attended McClymonds High School in Oakland, a predominantly white institution. After graduating with honors in 1932 he took a position at a local newspaper.

In 1939 Wilson received a Baccalaureate degree in Economics from the University of California at Berkeley.  During and after his undergraduate education he worked as a porter, sugar-factory laborer, and dishwasher, while pursuing a career in athletics.  Standing only five feet, five inches tall and weighing a diminutive 130 pounds, Wilson nonetheless quickly distinguished himself as a gifted tennis, basketball, and baseball player.  His athletic prowess attracted talent scouts, and soon followed a short-lived semi-professional baseball career.  He retired in 1943 however, as racially exclusionist policies in professional sports precluded his further advancement.

Disappointed, Wilson enlisted in the United States Army and served in a combat unit in Europe during the last two years of World War II.  By the end of the war he was promoted to First Sergeant.  Upon his return in 1946 Wilson was accepted at Hastings School of Law in San Francisco, where he received a law degree in 1949.  Immediately following graduation he began working in civil law.  Specializing in civil rights cases, he regularly offered pro bono work to low-income individuals.

Lionel Wilson first ran for the Berkeley City Council in 1953 and later in 1955, but was not elected on either occasion.  In 1960, however, he became the first African American judge of Alameda County when he was appointed to the Oakland Municipal Court by Governor Edmund G. Brown, Sr.  Four years later he was appointed to the Alameda County Superior Court by Brown.  In 1965 Judge Wilson was elected chairman of the Oakland Economic Development Council, an anti-poverty group funded by the Federal government.

Twelve years later in 1977, Judge Wilson resigned from the bench and ran for mayor of Oakland.  With the support of labor groups, the Black Panther Party, and liberal Democrats, he won a close run-off election, becoming the first African American mayor of that city.  With white flight having begun a decade earlier, and with the ever-increasing prominence of black militant groups like the Black Panthers, his election was a watershed event.  He represented not only the city’s first black mayor, but the first non-Republican mayor following decades of GOP leadership.

Wilson was elected to three consecutive terms.  He was a staunch proponent of civil rights and affirmative action, as well as a close ally of business leaders.  He was also a fiscal conservative.  Wilson worked hand-in-hand with Republican business leaders in implementing pro-business, pro-growth policies, initiating a decade-long boom in downtown economic development.

Wilson was defeated as he attempted to run for a fourth term in 1990.  By the late 1980s, Wilson’s image had become tarnished among many African Americans for his unwavering support of big business interests at the expense of neighborhood development.  Moreover, the crack-cocaine epidemic of the 1980s and his perceived indifference to escalating inner city problems proved his political demise.  Finally, a failed attempt at returning the National Football League team the Raiders to Oakland using taxpayer money served to further isolate him from his support base.  In the 1990 mayoral election Lionel Wilson finished in third place, receiving a mere 17 percent of the popular vote.

Lionel Wilson, a member of Alpha Phi Alpha Fraternity, died on January 23, 1998 at his Oakland home after a long battle with cancer.  He was 82.