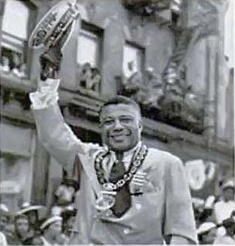 James Finley Wilson was born in Nashville, Tennessee in 1881 to Reverend James L. Wilson and Nancy Wiley Wilson. From 1922 to 1948, Wilson served consecutive terms as Grand Exalted Ruler of the Improved Benevolent Protective Order of the Elks of the World (I.B.P.O.E. of W.), one of the largest African American fraternal organizations in the nation. Wilson’s accomplishments as “Grand” established him as a revered leader among his fraternal brothers and sisters and a national figure in the African American culture.

Wilson graduated from Nashville’s Pearl High School and went on to study at Fisk University before moving to the western United States. While moving through Arizona, Colorado, Missouri, Wyoming, and even Alaska, Wilson explored numerous farming employment opportunities. He eventually secured a position as an editor for the Utah Plain Dealer. Seeking to advance his journalistic career, Wilson relocated to the eastern United States where he worked for the Baltimore Times, Washington Eagle, and New York Age. He was also a founder of The Norfolk Journal and Guide.

In 1922, Wilson was elected Grand Exalted Ruler of the I.B.P.O.E. of W. Throughout his reign as the “Grand,” Wilson increased the fraternal society’s national membership from 30,000 to 500,000 and oversaw the creation of approximately 900 new lodges. Wilson also led efforts to raise about $700,000 in scholarship money for African American college students. These accomplishments brought Wilson numerous supporters, secured his consecutive re-elections, and made Wilson a prominent leader in local and national African American communities.

As a member and leader of the Republican Party, Wilson served as the sanitary inspector for Denver. During World War II, he joined the ranks of African American leaders who believed that the destruction of “Hitlerism” would bring about equality within American democracy. At the 1941 National Baptist Convention in Cleveland, Ohio, Wilson encouraged black men to take up arms against Hitler and black women to serve as nurses for the military, believing their efforts would result in anti-lynching and anti-poll tax legislation, and promote equality in education and employment.