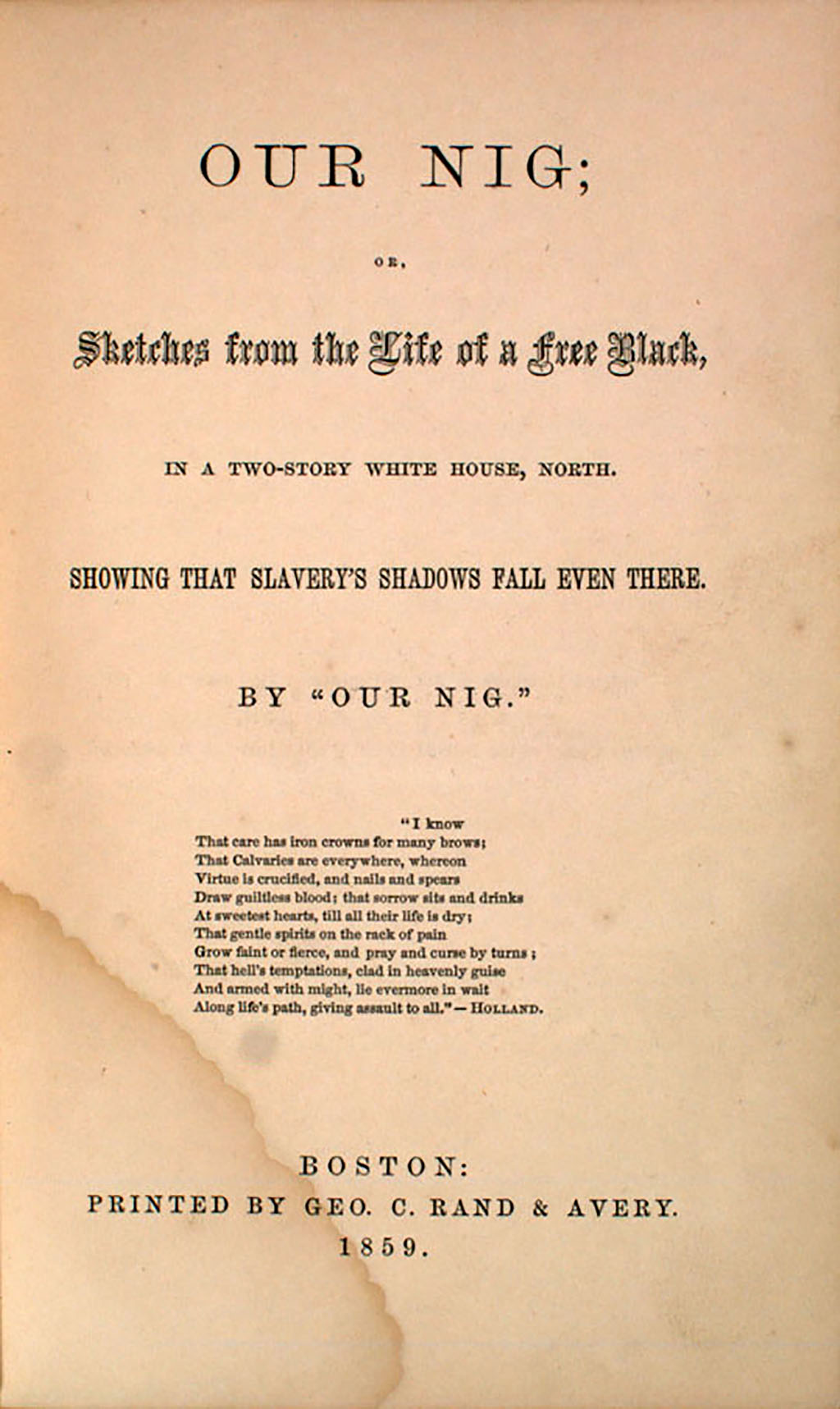 Author Harriet E. Wilson is believed to be the first African American woman to publish a novel in the United States. Her fictional autobiography Our Nig; or, Sketches from the Life of a Free Black, in a Two-story White House, North. Showing that Slavery’s Shadows Fall Even There was printed in 1859 by the Boston, Massachusetts publisher George C. Rand and Avery.

Much of what is known about the life of Harriet Wilson has been derived from the book, which up until the early 1980s was considered the work of a white author. In 1981, the scholar Henry Louis Gates, Jr. was shown the original edition in a Manhattan, New York bookstore and republished it in 1983 with his discoveries that the author was African American and that the story was largely autobiographical. It turned the literary world on its end, as up to that point it had been widely accepted that the first African American published novelist had been Frances Ellen Watkins Harper with Iola Leroy, or, Shadows Uplifted (1892).

Harriet E. Wilson was born Harriet E. Adams around 1828, most likely in Milford, New Hampshire. By 1850, she was living as a 22-year-old woman in Milford with the Samuel Boyles family, perhaps as their indentured servant. A year later she moved to Massachusetts to make a living as a seamstress, but plagued by poor health she took work as a servant. In 1851 she married Thomas Wilson, now known to be somewhat of a con man who abandoned Harriet less than a year later before the birth of their son George Mason Wilson. At the time of the birth, Wilson was living in a poor house in Goffstown, New Hampshire. She was forced to abandon her son while she returned to Boston to earn a living and regain custody of George.

Records from her time in Boston indicate that she may have sold hair dyes, but she turned to writing as a way to earn money for herself and her son. In 1859 Our Nig was published.  Six months later George died at the age of seven, still a resident of a Milford poor farm. The last public record of the author is a “Harriet E. Adams Wilson,” a listing in the 1863 Boston City Directory.

The remainder of Wilson’s life is the subject of scholarly speculation. Some have her back in a poor house in Milford. Others have her prospering as a businesswoman in Boston. Unfortunately, the book did not provide much financial success and was lost to obscurity until its resurrection by Gates over a century later.

Harriet E. Wilson, Our Nig; or, Sketches from the Life of a Free Black,
in a Two-story White House, North. Showing that Slavery’s Shadows Fall
Even There