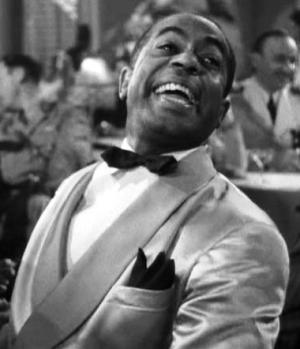 Arthur Dooley Wilson, best remembered for his popularization of the hit song “As Time Goes By” in the 1942 film classic Casablanca, was born in Tyler, Texas in 1886. Around 1913, he moved to Manhattan, New York, where he performed with the honorable James Reese Europe’s 369th U.S. Infantry “Hell Fighters” Band. After Lieutenant Europe was fatally stabbed by one of his own band members, Wilson formed his own band and toured abroad in London, UK and Paris, France, playing ragtime on the alto sax before returning to the United States in 1930 to embark on an acting career.

Initially, Wilson performed with Orson Welles and John Houseman in Federal Theater productions and went on to appear with the Lafayette Players. He eventually landed the role of Little Joe in the Broadway musical Cabin in the Sky. He later worked with the Peking Company in Chicago, Illinois and became one of the few African American performers to perform in whiteface.

Wilson made his screen debut in the 1939 Paramount Pictures film Keep Punching and subsequently appeared in many films as a porter, chauffer, or waiter. While still under contract to Paramount, Wilson was loaned out to Warner Brothers for the memorable role of Sam in Casablanca, in which he portrays a pianist/singer who acts as a philosophical confidant to Humphrey Bogart. Wilson’s rendition of “As Time Goes By,” composed by Herman Hupfeld and originally performed on Broadway in the early 1930s, sold more than a quarter of a million copies within months after the premiere of Casablanca.

After appearing in Casablanca, Wilson gained the role of a flirtatious business manager in the musical tribute to James Reese Europe in  Stormy Weather (1943), a film that offered a role of equal caliber. In addition to appearing in a series of films throughout the 1940s and 1950s, he starred as Beulah’s boyfriend Bill Jackson in the television sitcom Beulah (1953) opposite Ethel Waters and Louise Beavers. Beulah was his last major acting role before he retired from the screen and served as an executive board member for the Negro Actors Guild. Wilson died in 1953, in Los Angeles, California.