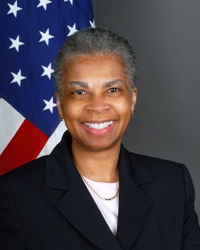 Ambassador Mary Jo Wills has worked in international affairs for over three decades. Her service to the United States has taken her to Africa, Europe, Latin America, and the Middle East. Most recently, she held the position of U.S. Ambassador to the island nations of Seychelles and Mauritius in the Indian Ocean.

Wills’s experience in U.S. Foreign Service began in 1980 when she served as a State Department desk officer first for Nigeria and then for Sierra Leone and Gambia. From 1999 to 2002, Wills was the Deputy Principal Officer at the U.S. Consulate in Milan, Italy. From 2003 to 2004, she was back in Washington serving as Chief of the Special Trade Activities Division and Deputy Chief of the Textile Trade Policy Division within the Economic Bureau of the Department of State. Within the Economic Bureau, she also worked as an International Economist in the European Bureau’s Office of Economic and Regional Affairs.

From 2004 to 2007, Wills was the Office Director of the Africa Bureau’s Economic Policy Staff. In 2007, she became the Director for Southern African Affairs and from 2009 to 2010, Wills served as the Acting Deputy Assistant Secretary for African Affairs.

In December 2009, the U.S. Senate confirmed President Barack Obama’s appointment of Mary Jo Wills as Ambassador to Mauritius and the Seychelles. On February 18, 2010, Wills presented her credential to President Sir Anerood Jugnauth of the Republic of Mauritius and began her ambassadorship.

In her work as Ambassador, Wills engaged officials from Mauritius and Seychelles to address a range of issues including pollution, effects of climate change, illegal fishing, piracy, trafficking in persons, and maritime security. While serving as ambassador she was the primary spokesperson for U.S. policies, interests, and values to the governments of Mauritius and Seychelles. On February 26, 2011, Wills ended her service as Ambassador and returned to the United States.

Since leaving her post, Wills has worked as a special advisor to the United States African Development Foundation (USADF) in Washington, D.C. The USADF is an independent federal agency that supports African designed, led, and managed solutions that address pressing local economic and social problems. At USADF, Wills consults with academia on effective models of foreign assistance to Africa.

Mary Jo Wills is married and has two sons.