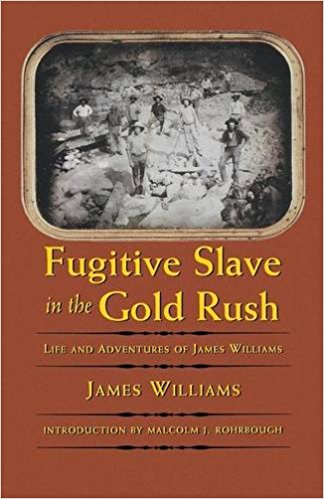 James Williams, a fugitive from slavery and the author of the only known full-length slave narrative published independently (in California), was born John Thomas in Elkton, Maryland, April 1, 1825. At age thirteen, he ran away from his master, William Hollingsworth, and fled to Pennsylvania. His first free act was to reunite with his mother, Abby, who had escaped slavery some years earlier and was living with her husband (Williams’s stepfather), William Jourden, in Somerset County, Pennsylvania. Williams mentions having a brother and a sister, though he does not name them in his narrative.

At age sixteen, Williams became active in the Underground Railroad. During this period of his life, he moved between Somerset, Philadelphia, and New York in order to improve his economic circumstances and to avoid the racial tensions of the time that sometimes culminated in race riots. To sustain himself, he worked a variety of jobs and opened and operated small businesses, including ice cream and fruit businesses in Philadelphia.

In response to an increase in racial violence in the eastern United States and passage of the Fugitive Slave Act in 1850, Williams emigrated to California via Panama in 1851. He sailed from New York to Panama on the North America, worked for a time in Panama to raise money for the second leg of his journey, and then sailed from Panama to San Francisco on the Jenny Lind. Upon arrival, Williams traveled to Sacramento, reaching that city on May 15, 1851. He immediately began to mine for gold, though soon discovered that he could do better financially working in support industries around the mines, including laundries, restaurants, and secondhand dry-goods stores.

Williams wrote and circulated versions of his autobiography in pamphlet form beginning in 1853. Five editions of Life and Adventures of James Williams were published between 1873 and 1893, with Williams adding material at each printing. The first four editions were published by Women’s Union Print of San Francisco, located at 424 Montgomery Street. The final edition was published by A. H. Sickler of Philadelphia. Historian Malcolm Rohrbough edited and republished the 1893 Sickler edition in 2002 with the University of Nebraska Press, retitling it Fugitive Slave in the Gold Rush.

In his narrative, Williams relates an itinerant life full of a diversity of experiences and sharp reflections on the rapidly changing culture in the American West and the United States more broadly. Williams’s narrative also highlights his escape from slavery, his work on the Underground Railroad, travel to California via Panama, life in the gold mines, reflections on California and federal law, travel to Mexico and British Columbia, construction of the transcontinental railroad, his work as an agent for the African Methodist Episcopal Church, Spiritualism, Mormons, the Modoc War (1872–73), and the Chinese Exclusion Act (1882), among other topics. The narrative remains an invaluable source of information on black life in the mid-nineteenth-century West, as well as a window into the black experience of Reconstruction.