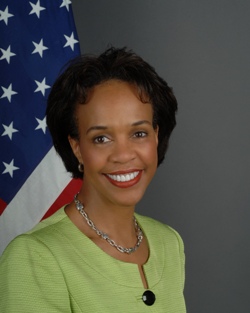 Ambassador Bisa Williams was a career member of the Foreign Service of the United States Department of State. She was nominated by President Barack Obama in 2010 to serve as the U.S. ambassador to the Republic of Niger.  After Senate confirmation, she headed the U.S. Embassy in Niamey, Niger from 2010 to 2013.

Williams was born in Trenton, New Jersey in 1954. Her father Dr. Paul T. Williams was a surgeon while her mother Eloise Owens Williams was a professor of Social Work at the College of New Jersey. Williams’s sister Ntozake Shange is known for writing her award winning 1976 Broadway play, “for colored girls who have considered suicide/ when the rainbow is enuf.” Williams’s other sister, Ifa Bayeza, who is also a playwright, wrote a multi-generational novel, Some Sing, Some Cry, with Shange in 2010.

Williams joined the U.S Foreign Service in 1984. Her first overseas assignment was a general services officer at the U.S. Embassy in Conakry, Guinea (1984-1986).  She then served as a political officer at the embassy in Panama City, Panama (1986-1988). Williams spent a year at the State Department in Washington, D.C. as a country officer for the countries of Cape Verde, Liberia, and Sierra Leone. She later returned to Panama for two years as a political officer following the U.S. overthrow of Panamanian dictator Manuel Noriega. From 1991 to 1992 she was a special assistant to the coordinator of assistance to the Newly Independent States of the former Soviet Union.

Williams worked as a political and economic officer for the U.S. mission at the United Nations in New York from 1993 to 1997.  Between 1997 and 1998 she was a special assistant to U.S. Secretary of State Madeleine Albright.  She also served briefly the first secretary for African Affairs at the U.S. embassy in Paris, France. From July 2001 to April 2004 Williams held the position of deputy chief of mission in Port Louis, Mauritius. She later served as the director for international organizations at the National Security Council in the George W. Bush White House from 2005 to 2007.

In 2008 Williams became the coordinator for Cuba Affairs at the U.S. State Department and then later served as acting deputy assistant secretary for Western Hemisphere affairs. She visited Cuba for six days in September 2009 during which she made headlines for meeting with dissidents opposed to Castro-led socialist regime that had controlled the country since 1959.

Ambassador Williams has received five Superior Honor and four Meritorious Honor Awards. She is proficient in the French, Portuguese, and Spanish languages.