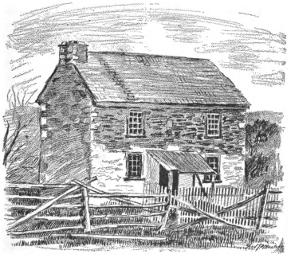 William Parker was a former slave and an abolitionist. As the principal leader in the 1851 incident in Christiana, Pennsylvania known as the Christiana Riot, Parker helped bring more attention to the problem of slavery in the long years leading up to the Civil War. The Christiana Riot would shed light on the Fugitive Slave Law of 1850.

According to his memoir, The Freedman’s Story, William Parker was born into slavery in Anne Arundel County, Maryland on the Rowdown Plantation. His mother, Louisa Simms, passed away at an early age and he was raised by grandmother. The date of Parker’s birth is unknown. Parker spent his early years on the plantation, but when he was in his late teens he escaped slavery and moved north to find freedom. Parker settled in Christiana, Pennsylvania and married Eliza Ann Elizabeth Howard, with whom he had three children.

After his move to the north William Parker had the opportunity to see Frederick Douglass, former slave himself and abolitionist, and the prominent abolitionist William Lloyd Garrison speak. Inspired by both of these men, and galvanized by his own experiences, Parker decided to devote himself to the cause of abolishing slavery.

As a part of the Lancaster Black Self-Protection Society, Parker occasionally secretly housed slaves on the run in his farmhouse. On the morning of September 11, 1851 Parker was giving refuge to Noah Buley, Nelson Ford, George Ford, and Joshua Hammond, all fugitive slaves from Maryland belonging to wealthy slaveholder Edward Gorsuch.

The Christiana Incident began when Gorsuch, along with a U.S. marshal and a posse, arrived at Parker’s door with a warrant for his slaves.  Under the terms of the Fugitive Slave Law of 1850, Parker could be arrested and prosecuted for harboring the runaway slaves.  William Parker, however, stood his ground and refused to give up the fugitives. His wife used a predetermined signal to call on other black and white anti-slavery people in the area who quickly arrived armed at the Parker house.  In the ensuing confrontation Gorsuch was shot dead and one posse member was wounded.

Although the Christiana Incident would eventually prove to be a strong blow against slavery and specifically the Fugitive Slave Law of 1850, it was immediately problematic for Parker himself. Following the incident Parker and his family fled to Canada via the Underground Railroad. With encouragement from Frederick Douglass, Parker became the Canadian correspondent for Douglass’ paper, the North Star.  Both Douglass and Parker used the incident to rally support for the anti-slavery cause. After the Civil War, in February and March of 1866, the Atlantic Monthly magazine published Parker’s memoir, The Freedman’s Story, which presented among other things, his version of events at Christiana. It is unknown when or where William Parker died.