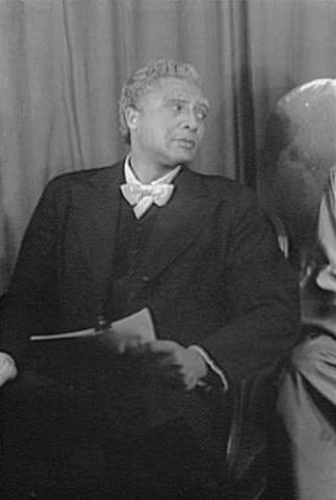 William Marshall was a commanding, deep-voiced actor who enjoyed a four-decade career in both classical stage works and Hollywood movies and TV. The London Sunday Times once called him “the best Othello of our time,” but he is persistently best known for the blaxploitation-era films Blacula (1972) and Scream, Blacula, Scream (1973).

William Horace Marshall was born on August 19, 1924 in Gary, Indiana to Vereen and Thelma Edwards Marshall. His father was a dentist. He came to New York and studied art at New York University before taking acting classes at the Actors’ Studio and the Neighborhood Playhouse.

Trained as both a classical singer and actor, Marshall made his Broadway debut in 1944 in Carmen Jones. In 1950 he was understudy to Boris Karloff as Captain Hook in Peter Pan. The next year he played God (“de Lawd”) in a revival of Marc Connelly’s The Green Pastures.

Marshall acted in Shakespeare plays in Europe and the U.S., most notably as Othello, a role he played to great acclaim in at least eight different productions. He also had a lifelong interest in educating the public about important black historical figures and took on the roles of Frederick Douglass and Paul Robeson. He toured briefly with gospel singer Mahalia Jackson near the end of her career, reciting the works of black poets.

Marshall’s first film role was a memorable one, as King Dick, a revolutionary supporter of the Haitian liberator Toussaint Louverture, in the 1952 film Lydia Bailey. The film provided an excellent showcase for the 6’5” Marshall. He followed this with appearances in Demetrius and the Gladiators (1954), in which he supported the film’s star, Victor Mature. In 1957 he appeared in Something of Value, about the Mau Mau uprising in Kenya. In the film Marshall delivered a recruitment speech whose ringing authority persuaded a hesitant Sidney Poitier’s character to join the bloody anti-English movement. In 1968, he played a district attorney in The Boston Strangler.

Marshall achieved movie stardom for the first time in 1972, when he played in a black version of the Bram Stoker character Count Dracula in a film with the highly marketable title, Blacula. In this adaptation, 18th century African Prince Mamuwalde is turned into a vampire by Dracula himself. He languishes in a coffin for 200 years, finally awakening in crime-ridden Los Angeles, where he sets about punishing drug dealers. Marshall managed to maintain his dignity in the cartoonish role through a cool and controlled performance. Blacula and its 1973 sequel were smash hits.

Guest work in many TV shows (Bonanza, The Jeffersons, Maverick, and more) followed, including a role as computer genius Dr. Daystrom in an episode of the original Star Trek series. For several years he played the King of Cartoons on a Saturday morning kids’ show. He also taught theater and acting at the University of California at Irvine and the Mufandi Institute in the Watts neighborhood of Los Angeles.