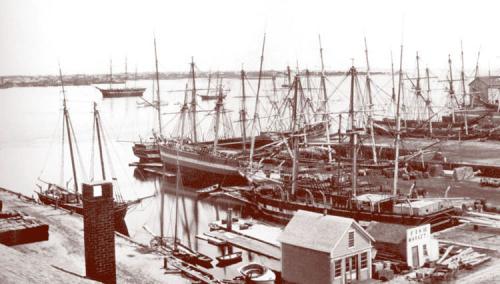 Since J. Clay Smith’s publication of Emancipation: The Making of the Black Lawyer, it has been taken as gospel that Boston resident Macon Allen in 1844 became was the first African-American admitted to the bar to practice law in the United States.  Recently, as part of the celebration of the 150th Anniversary of the founding of the Massachusetts Superior Courts (the state’s highest trial court), doubt has been cast on that assertion.  It is quite clear that Attorney Allen was the first black person formally admitted to practice in Massachusetts and the nation in general.  However, a little known lawyer by the name of William Henry Johnson may actually have been the first African American eligible to practice law.  Mr. Johnson could have begun practicing in 1842.  He had qualified for that bar at that time.  However, for reasons that are unknown, he was not sworn in until 1865.

What is known about William Henry Johnson first came to our attention because he represented Charles Cuffee, a 13 year old juvenile who was charged with and convicted of murder in New Bedford, Massachusetts in 1870.  Squire Johnson, as he was known by then, was asked by the Bristol County District Attorney George Marston to represent young Cuffee.  The Cuffee name should sound familiar because Charles was the great nephew of Paul Cuffee the famous African American sailing merchant.  Paul Cuffee owned a fleet of ships and sailed around the world bartering and trading.  He also earned enough money to purchase the freedom of various family members.

William Henry Johnson was born into slavery in Richmond, Virginia on July 16, 1811.  He was the property of Andrew Johnson.  Small in stature, William Henry Johnson became a jockey.  Between 1827 and 1833, Johnson won numerous purses for his owner.  As a jockey, he had the opportunity to meet former presidents Thomas Jefferson and James Madison.  Both ex-presidents were so happy with Johnson’s performance on horses they wagered on that they each gave him a tip from their winnings.

Unlike many former slaves, Johnson reported that plantation life was relatively comfortable.  Nonetheless because his owner had a gambling problem, Johnson feared that he or members of his family would be sold to satisfy a gambling debt sometime in the future.  Thus in 1833 Johnson decided to escape from slavery.  With the help of his master’s daughter, Johnson and his mother fled the plantation.  The daughter had great affection for William Henry and may have been his half sister.  Whatever the reason, she helped Johnson and his mother get to Richmond where with the winnings from Johnson’s last race, they booked passage on the schooner Tantovy for New York City.

The Tantovy was wreaked by a gale near Sandy Hook, New Jersey.  Johnson and his mother were washed overboard and were rescued by a British vessel which deposited them on Long Island.  The family made their way to the New York City area.  In 1834, Johnson was given work and shelter by New York merchant John Jacob Astor who at the time was the wealthiest man in the United States.  When Johnson learned that the overseer from his Virginia plantation was in the city searching for fugitive slaves, Astor aided Johnson and his mother in escaping to New Bedford, Massachusetts on the schooner Rodman.

Because of its abolitionist leanings New Bedford was then the home of numerous fugitive slaves, the most famous of whom was Frederick Douglass.  Johnson held a number of jobs in New Bedford.  At various times he sold soap and newspapers, worked as a servant, and was one of the town’s street lighters. Johnson may have worked on whaling ships since New Bedford was at the time a leading American whaling port.  In 1836 Johnson married Hannah Perry of New Bedford.  When his first wife died, he married Ann Elizabeth Carter also of New Bedford.  Johnson had twenty five children at the time of his death.

While working as a janitor in the law office of New Bedford attorney Timothy G. Coffin, Johnson taught himself to read and write by using Coffin’s law books.  By 1840 he had gained employment in the office of Francis L. Porter, Esq.  Here Johnson began to read (that is, study) law formally even as he worked as a janitor.  By 1842, Johnson qualified for the Massachusetts Bar.  He could have taken the attorney’s oath at that point but for reasons that remain a mystery, he would not be formally admitted to the Bar until 1865, some twenty three years later, according to the records of the Supreme Judicial Court of Massachusetts.  There is some speculation that because he was still technically a fugitive slave and thus in violation of the law, he could not become a practicing attorney.  Moreover his unusual status would have would have brought equally unusual attention to himself and thus he would have been a prime target for slave catchers.

Johnson instead turned his attention and oratorical skills to the anti-slavery movement.  He joined the Wilberforce Debating Society in New Bedford which included Frederick Douglass.  Ironically, the abolitionist debating societies were segregated. On several occasions the black and white societies debated each other although most debates were usually among Society members. In one instance the Wilberforce Society debated the topic of whether alcohol or slavery was the greater evil.  Johnson who was also a member of the Temperance Movement, took the position favoring Temperance.  His opponent was Frederick Douglass.  At the end of this debate, Johnson conceded that Douglass had made the more compelling case.

For many years, William Henry Johnson travelled the anti-slavery lecture circuit which included much of northern New England.  One evening, Johnson and his associate filled a church in Maine to capacity.  Residents of the region were curious about this anti-slavery movement and the black men who were visiting their town to talk about it.  News reports indicated that Johnson’s presentation was so moving that many in the audience openly wept.

As noted earlier, William Henry Johnson was admitted to practice law in Massachusetts  1865 although he qualified for the bar in 1842.  He signed the lawyer’s register in 1842 as Wm. Henry Johnson but there is no record of him practicing law until 1859, six years before he is supposed to have been licensed.  There is no explanation for the discrepancy.

In 1859, he tried a divorce case in Providence Rhode Island.  Johnson also tried a criminal case on Cape Cod in 1864.  Johnson was also appointed by Massachusetts Governor John Andrew as a Justice of the Peace in the New Bedford area from 1860 to 1863, thus making him one of the first black judicial appointees in the nation.

After the Civil War Johnson practiced law openly and was affectionally know as Squire Johnson.  As mentioned earlier he was involved in the Charles Cuffee murder case in 1870.  Johnson took the Cuffee case at the request of his friend and mentor, Bristol County District Attorney George Marston.  In spite of his relationship with Marston, Johnson was a zealous, if ultimately unsuccessful, advocate for his client.

Squire Johnson also defended liquor dealers of New Bedford and was known to have been retained by impoverished whites in the area who were often whiskey smugglers.  Eventually, Johnson tried criminal and civil cases as far away as New York and New Hampshire.  Newspaper accounts of the era praised him for his courtroom skills on behalf of his clients even when he lost.

In 1880 Johnson entered politics and was elected to the Common Council (now City Council) of New Bedford, serving a single term until 1881.  Johnson remained a member of the Bristol County Bar until his death in December 19, 1896.

William Henry Johnson’s journey from slavery to freedom took numerous interesting twists and turns. Squire Johnson represented the unpopular and vulnerable wherever he could.  He was respected by fellow members of the Bristol County Bar and by the citizens of New Bedford, Massachusetts.  His was a true Horatio Alger story, a black legal pioneer whose personal history reflected an improbable rise from the slave quarters to the courtroom.

Ward Jr., R. (2009, September 15). From the Slave Quarters to the Courtroom: The Story of the First African American Attorney in the United States. BlackPast.org. https://www.blackpast.org/african-american-history/william-henry-squire-johnson-slave-quarters-courtroom/