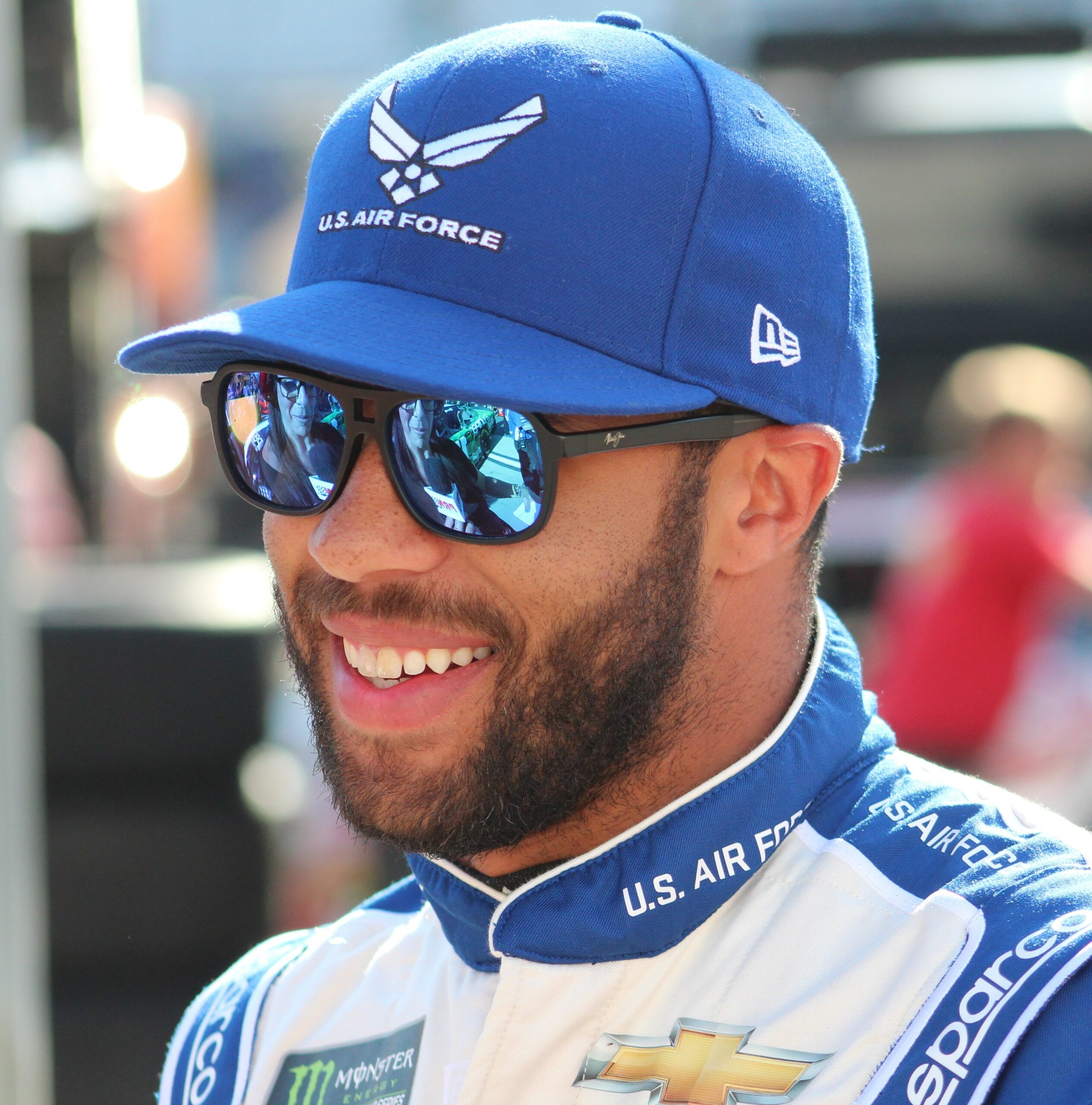 William Durrell “Bubba” Wallace is only the second person of African descent to win a NASCAR race but he is best known for his 2020 successful campaign to have the Confederate flag, long a controversial and racially polarizing symbol for Americans, officially banned from NASCAR events.

Born October 8, 1993 in Mobile, Alabama, one of the two children of William Durrell Wallace Sr., a white small business owner, and Desiree Wallace, a black social worker, he grew up in Concord, North Carolina, and attended Northwest Cabarrus High School. His mother followed his athletic sister, Brittany, to her basketball games while his father took him to automobile races across the nation. At age nine Wallace entered his first Bandolera (small car) race and compiled an impressive record of victories.

Wallace profited substantially from NASCAR’s program to increase the number of minority and female racers called Dive for Diversity and got off to a good start twice winning NASCAR K&N Series races in 2010 at Greenville-Pickens Speedway in South Carolina at the remarkably tender age of 16, and Lee USA Speedway in New Hampshire. Unsurprising, at age 17 he was picked 2010 Rookie of the Year, the first black driver to win the award in a NASCAR series. In 2012 he again won the NASCR K&N Pro Series East at Greenville-Pickens Speedway; in 2013 and 2017 he won races in NASCAR Gander RV and Outdoor Truck Series at Martinsville Speedway (Virginia) and the Michigan International Speedway; and in 2017 he was victorious in the CARS Super Late Model Tour at Bristol Motor Speedway (Tennessee).

To date, Wallace’s best career performance occurred at the 2018 Daytona 500 race in which he finished second. In 2019 he won segment two of the Monster Energy All-Star Race at the Charlotte Motor Speedway and came in third at the Brickyard 400, Indianapolis Motor Speedway. In February 2020, just prior to COVID-19 pandemic overwhelming the nation, he came in sixth at the Pennzoil 400 in Las Vegas.

It was the hard-to-watch video of the police killing of George Floyd in May 2020 that pushed Wallace to call for NASCAR to ban the display of the Confederate flag at its races. Two day later, on June 10, 2020, NASCAR did as he requested—to the dismay of many race car fans. On June 21, 2020 a noose, symbolic of the lynching of blacks, was found in his garage stall and assumed to be a racist reaction targeted at him. In an unexpected, emotional show of respect and solidarity with NASCAR’s only full-time black driver, on June 22, 2020 at the Talladega Speedway in Alabama fellow drivers and crewmen, some wearing “Black Lives Matter” T-shirts, marched behind his racer down pit road.

In 2020, Wallace was in his third season driving No. 43 Chevrolet Camaro ZL1 1LE with Richard Petty Motorsports. Better known for his activism than his competence as a race driver, Wallace has openly discussed his battle with mental depression though he enjoys the encouragement and the full support of his divorced parents and girlfriend to continue high level racing. His home is situated on three acres in Charlotte, North Carolina.