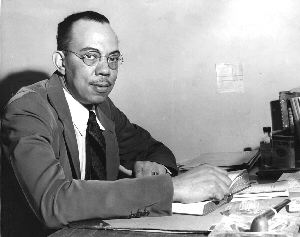 Forrest Oran Wiggins was born in 1907 to Charles and Cora Cosby Wiggins. A native of Vincennes, Indiana, Wiggins attended public schools in Vincennes and Indianapolis. In 1928 Wiggins received his B.A. from Butler University and in the following year earned a certificate in French from the Sorbonne. Wiggins would go on to teach French and well as philosophy on various college campuses. He received his Master’s (1929) and Ph.D. (1931) in philosophy with both degrees earned from University of Wisconsin.

Wiggins became the first African American to teach at University of Minnesota. Wiggins was one of only four African American philosophers that by 1950 had regular faculty posts on predominantly white colleges. A long time member of the American Philosophical Association, Wiggins came to Minnesota highly recommended as a scholar and teacher. When Wiggins arrived in the Twin Cities, he had considerable teaching experience, having been an instructor for 13 years at a number of black institutions including: Morehouse College, Howard University, Johnson C. Smith, North Carolina Central, and Louisville Municipal College. Despite his credentials and experience, Wiggins was hired at the rank of (untenured) instructor.

Wiggins taught from 1946 until 1952 and he proved to be a very popular teacher at Minnesota. However, in 1952 he was dismissed by the president of the University despite the recommendation of the philosophy department that he be promoted. An outspoken scholar/activist, Wiggins was the victim of both McCarthyism and racism. Wiggins served as Vice President of the Minnesota Progressive Party where he campaigned for Henry Wallace’s presidential bid in 1948 and openly attacked capitalism, racism and imperialist war. The Wiggins case received national attention when it was reported by The Nation and supported by the ACLU, Negro Labor Council, the Minnesota Progressive Party, and the Communist Party, Minnesota-Dakotas. After leaving Minnesota, Wiggins taught at several Historically Black Colleges and Universities (HBCUs) and ultimately retired from West Virginia State University. He died at Merritt Island, Florida in 1982.