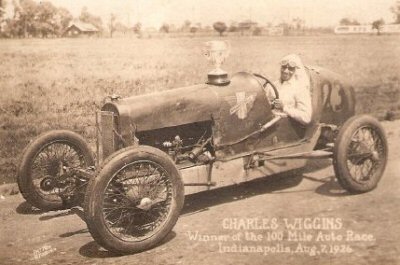 Charlie Wiggins, known as “the Negro Speed King,” was an African American motor racing pioneer who competed in the segregated Midwest in the early decades of the 20th Century.  In addition, he was a highly skilled mechanic, often sought after by white racing drivers competing in the annual Indianapolis 500 Motor Race. Throughout his career Wiggins fought for the rights of black mechanics and drivers.

Born in 1897 in Evansville, Indiana, Charlie Wiggins grew up in a poor home; his father was a coalminer. After the death of his mother, Wiggins worked at a shoe shine stand outside a car repair shop where he was eventually hired as an apprentice in 1917.  His opportunity came when many of the white garage mechanics left to join the Army.  Wiggins was the first black mechanic in Evansville and quickly rose to become chief mechanic.

Wiggins and his wife, Roberta Sullenger, whom he married in 1917, left the area in 1922 for Indianapolis.  Two years later the couple opened their own garage and Wiggins quickly became that city’s top mechanic.  In his spare time Wiggins assembled parts from auto junkyards to develop his own car, known as “the Wiggins Special.”

Wiggins tried to enter his car in auto racing’s greatest prize, the Indianapolis 500, only to be blocked by the American Automobile Association because of his race.  Unperturbed, Wiggins and other African American drivers formed their own racing league, holding races across the Midwest. Wiggins was outstanding in these races, earning himself the nickname “the Negro Speed King.”  Wiggins’s success garnered the attention of wealthy black Indianapolis resident William Rucker who established the Gold and Glory Sweepstakes, an annual 100-mile race for black drivers on a one-mile dirt track at the Indiana State Fairgrounds.

Charlie Wiggins did not compete in the first race in 1924, which with a crowd of 12,000 was the largest sporting event held for African Americans up to that point.  He did race in subsequent competitions and over the next decade won three Gold and Glory Sweepstake championships.

Wiggins’s success in racing lay in both his skill as a driver and his engineering knowledge, which allowed him to build his own cars. This skill brought him friendship with white Indy 500 competitors such as Harry MacQuinn, who asked Wiggins if he could drive one of the mechanic’s famed “Wiggins Specials.” Wiggins agreed but insisted on driving his own car during testing, a move which made a powerful statement against segregation in auto racing.  Wiggins’s prominence and criticism of racial discrimination made him a target of the Indiana Ku Klux Klan which attacked him and vandalized his house on a number of occasions.

Charlie Wiggins’ racing career ended in 1936. In the fourth lap of the Gold and Glory Sweepstakes race, he was seriously injured in a 13-car wreck, losing a leg.  He was never able to race again. Without its biggest draw, the Gold and Glory Sweepstakes folded at the end of the year.  Following the crash, Charlie Wiggins made himself a wooden leg and for the next 40 years built and repaired cars while training and advising drivers and mechanics. He continued to fight for African American participation in motor racing until his death in Indianapolis in 1979 at the age of 82.