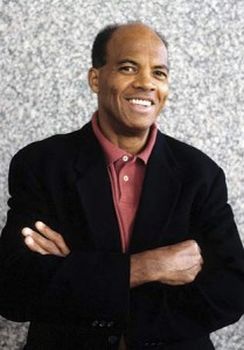 John Edgar Wideman was born in 1941 in Washington, D.C. but grew up in the predominantly black middle class community of Homewood near Pittsburgh, Pennsylvania. By the time Wideman was in high school, his family had moved to Shadyside, an upper middle class mostly white neighborhood where Wideman excelled as an athlete and scholar; he was a basketball player, class president, and valedictorian. In 1959 he entered the University of Pennsylvania where he majored in English and was inducted into Phi Beta Kappa. When Wideman graduated in 1963 he became the second African American, after Alain Locke, to receive a Rhodes scholarship to Oxford University.  He graduated with an MA in eighteenth-century literature in 1966.   Between 1966 and 1967 Wideman attended the University of Iowa where he completed his first novel, A Glance Away, in 1967.

Between 1967 and 1975 Wideman was both an assistant professor and an assistant basketball coach at the University of Pennsylvania.  Wideman also served as the first director of the University of Pennsylvania’s African American Studies Department. Throughout this period he continued to write.  In 1973 he published his third novel, The Lynchers, which garnered significant attention.

In 1975 Wideman became a professor of English at the University of Wyoming, a position he held for eleven years. While there he published a number of works including The Homewood Books, Hiding Place, and Damballah all of which appeared in 1981. These three works, based on family stories told at his grandmother’s funeral, reflected Wideman’s linkage of his personal history with the larger experience of African Americans in the early 20th Century black diaspora.  In 1983, Wideman received the PEN/Faulkner Award for his novel Sent for you Yesterday.

Wideman’s writings have been powerfully influenced by two personal tragedies which he subsequently addressed in his writing. The first tragedy was the 1976 robbery and murder conviction of his younger brother Robert who was sentenced to life without parole. Wideman discussed his relationship with his brother and his sense of responsibility for Robert in Brothers and Keepers (1984) which was nominated for the National Book Award. In 1986 Wideman’s teenage son Jacob killed a classmate and was sentenced to 25 years to life. Wideman described this episode in Philadelphia Fire (1990), which won a second PEN/Faulkner Award.

In 1986, Wideman accepted a professorship at the University of Massachusetts at Amherst. Seven years later he received a MacArthur “Genius” Fellowship for his work in literature.  John Edgar Wideman is currently the Asa Messer Professor and Professor of Africana Studies and English at Brown University.  He is the author of over twenty books and the recipient of many honors and awards including the O. Henry Award, the American Book Award for Fiction, and the Lannan Literary Fellowship for Fiction.