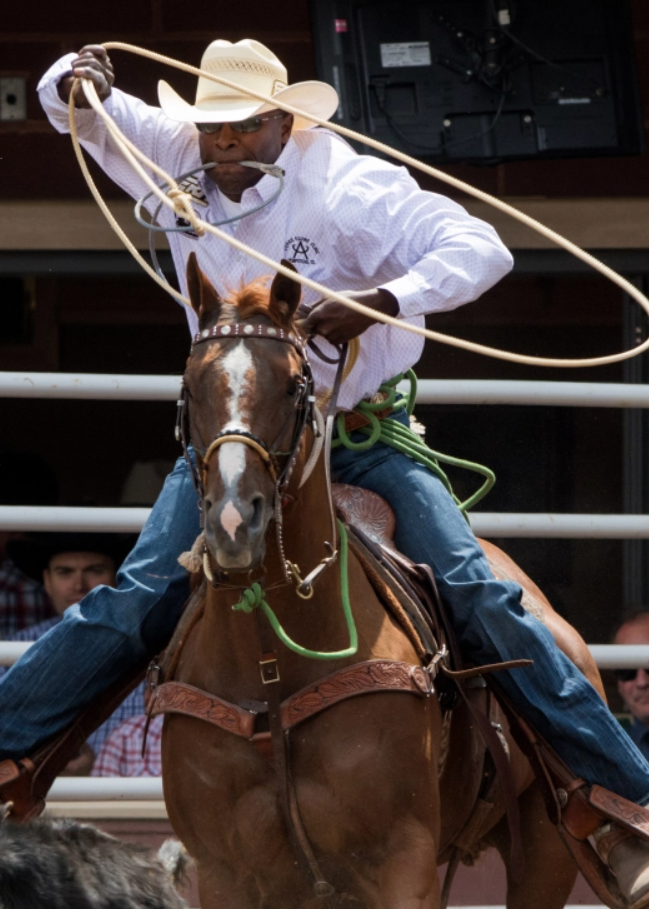 Fred Whitfield is a black rodeo cowboy who holds eight world championships in tie-down roping with the Professional Rodeo Cowboys Association (PRCA). Born August 5, 1967 in Houston, Texas to parents Willie and Marie Whitfield who bore five children; two were given up for adoption due to the family’s low socioeconomic status. Fred’s father Willie was a violent man and was incarcerated after being found guilty of murder.

Tie-down roping (formally known as calf roping) is a classic rodeo event where a cowboy lassos a calf, jumps from his horse, and binds the calf’s legs with a smaller rope. The cowboy to complete both tasks in the shortest amount of time wins. Tie-down roping originated from working ranch life, allowing the cowboys to restrain calves in the herd in order to be branded.

Growing up in a destructive household Whitfield found an escape in roping. His mother Marie worked for the Moffitt family as a house cleaner and Whitfield spent most of his time with Roy, the son of Joanne and Don Moffitt. Roy competed in the rodeo circuit and taught Whitfield how to rope. After leaving rodeo competition, the Moffitt family funded Whitfield’s early rodeo career.

Whitfield’s career took flight in 1990 when he won the calf roping title at Wyoming’s Frontier Days, leading him to win in the same year the PRCA Resistol Rookie of the Year. From there Whitfield won his first world championship in tie down roping at the National Finals Rodeo (NFR), the largest professional rodeo in the world, in 1991. In 1997 he set the NFR record by roping ten calves over the ten-day event with an average time of 84.0 seconds.

To date Whitfield holds seven World Championships in tie-down roping. He is the second black cowboy to win a NFR world championship (the first was bull rider Charles Sampson in 1982); he is the first black cowboy in the PRCA to win the All-around NFR title where he competed in three events: tie-down roping, steer wrestling, and team roping in 1999. Whitfield is the third cowboy in history to win over $2 million over his career.

Whitfield is considered by many observers to be the best tie-down roper in history. His talents have proved to be record-breaking and championship-holding; it has not come easily competing in a white-dominated sport, and early in his rodeo days, Whitfield had several instances in which violence was used against him on and off rodeo grounds due to his race.

Whitfield now resides in Hockley, Texas with his wife Cassie and their two daughters, Savannah and Sydney. Now in his 50s, he is semi-retired and spends more time at home with his family.