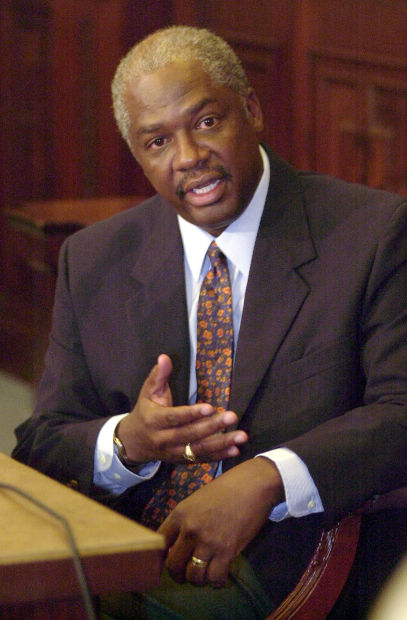 Ronnie Lee White became the first black justice to serve on the Missouri Supreme Court in 1995 and served until 2007. He was the court’s Chief Justice from 2003 to 2005. In addition to serving as a judge, White has been a public defender, an attorney, a city council memberin St. Louis, a representative in the Missouri House of Representatives, an adjunct professorat Washington University School of Law, and a partner at a law firm.

Ronnie White was born on May 31, 1953 in St. Louis, Missouri. In 1977 he earned his Associate of Arts from St. Louis Community College and his Bachelor of Arts in political science from Saint Louis University in 1979. In 1983 White earned his Juris Doctor from the University of Missouri-Kansas City School of Law.  In 1969, six years prior to enrolling in community college, White joined the U.S. Army Reserve, which he served as a member of until 1980.

In 1989 White was elected to the Missouri House of Representatives where he served as a Democrat for three terms. In 1993 White became a member of the St. Louis City Council before becoming a judge on the Missouri Court of Appeals in in 1994. In 1995 White left the Court of Appeals to join the Missouri Supreme Court as their first black justice. He presided over the court as Chief Justice from 2003 to 2005, becoming the Court’s first black Chief Justice. In 2007 White retired from the court to become a partner at the private law firm, Holloran, White, Schwartz & Gaertner LLP. During White’s time as a Missouri Supreme Court Justice he also worked as an adjunct professor of trial advocacy at Washington University School of Law, St. Louis from 1996 until 2014.

White is now a U.S. District Judge for the United States District Court for the Eastern District of Missouri after being nominated by President Obama in 2013. White was confirmed in 2014 by the U.S. Senate.

White has accumulated numerous recognitions throughout his career, including the Distinguished Lawyer Award from the Bar Association of Metropolitan St. Louis; an Honorary Doctorate of Law from both Saint Louis University and Harris-Stowe State Community College, St. Louis; the Outstanding Public Service Award from Harris-Stowe; the Distinguished Non-Alumni Award from the University of Missouri-Columbia School of Law; the Dr. Martin Luther King, Jr. State Celebration Commission Distinguished Statesman Award; and the MOKAN Legacy Award.