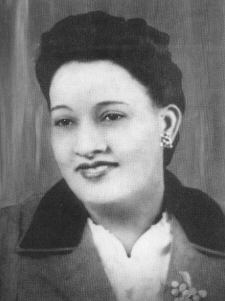 Lulu Belle Madison White, civil rights activist in the 1940s and 1950s, devoted most of her adult life to the struggle against Jim Crow in Texas.  She campaigned for the right to vote, for equal pay for equal work, and for desegregation of public facilities.

Born in 1900 in Elmo, Texas to Henry Madison, a farmer, and Easter Madison, a domestic worker, Lulu Belle Madison White received her early education in the public schools of Elmo and Terrell, Texas.  She graduated from Prairie View College where she received a bachelor’s degree in English in 1928. After marrying Julius White and teaching school for nine years, White resigned her post to devote full time service to the Texas National Association for the Advancement of Colored People (NAACP) in its campaign to eliminate the state’s all-white Democratic primary.

In 1937, she became Director of Youth Council and two years later acting president of the Houston branch of the NAACP.  In 1943, she was elevated to full-time executive secretary of the Houston branch, making her the first woman in the South to hold such a post.  Under her leadership, Houston became the second largest NAACP chapter in the country.   Finally, in 1946, she was named director of state branches for the state of Texas.  In that year, she led the fight to integrate the University of Texas by persuading Herman Marion Sweatt to become a plaintiff in the NAACP lawsuit to seek the desegregation of the University of Texas.  The case, Sweatt v. Painter (1950) ended de jure segregation at the campus and established an important precedent for Brown v. Board of Education four years later.

Politically liberal, White joined James Frank Dobie, Herman Sweatt, and others in 1948 in an effort to get Henry Wallace’s Progressive party on the presidential ballot in Texas.  White’s friendships with Walter White, Daisy Lampkin, Thurgood Marshall, and Roy Wilkins enabled her to exert influence on the NAACP nationally.  She was a field worker in the national NAACP office between 1949 and 1951.  Afterward, Lulu White returned to Houston and devoted full time to her position as director of state branches.

Lulu White died on July 6, 1957 and was buried in Houston, Texas.  The week before her death, the National NAACP established the Lulu White Freedom Fund in her honor.