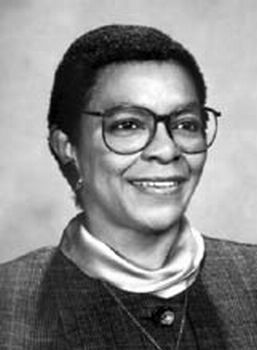 Lois Jean Barron White, the first African American President of the National Parent Teacher Association (PTA) was born in Nashville, Tennessee on March 21, 1938. She was raised by her grandmother, Rosa Barron, as her own mother lived away in Massachusetts.  White’s grandmother taught her the value of taking responsibility for her life and focused on doing the “right thing.” These life lessons resonated with White and helped to shape her professional decisions later in life.

White became interested in music as a child and initially studied piano before switching to the flute.  She was naturally very talented and was considered by some a child prodigy.  When the Nashville youth orchestra rejected her because of her race, the New York Herald Tribune reported the story and arranged for her to play with the New York City youth orchestra.

White earned a B.A. in Music at Fisk University, Nashville, Tennessee in 1960 and received further training at Indiana University. She then taught music at Mills College in Birmingham, Alabama from 1960 to 1962 and while there met her future husband, George White.  In 1963 she became a member of the Community Orchestra of Atlanta.  Four years later, in 1967, White and her family moved to Knoxville where she joined the Oak Ridge Symphony Orchestra, serving primarily as a principal flutist.  She retired in 1991 after 24 years with the Orchestra.

White initially became involved with the Parent Teacher Association in Knoxville for the benefit of her son.  Recognizing the importance of both volunteer work and the central role of parents in their children’s educational development, she joined the Knoxville PTA and eventually was voted a representative to the PTA Council, which served as a link between the local and state chapters. She was soon thereafter asked to serve as cultural arts chairperson for the Tennessee PTA after her Council’s exhibit attracted considerable attention at the Tennessee State PTA Convention in Tennessee in 1981.   She was later asked to collaborate with other state chairs on similar projects for the next national convention.

In 1989 White became the first African American elected Tennessee State PTA President. Six years later, in 1995, she was elected president of the National PTA.  As president she led nearly 6.5 million parents, teachers, school administrators, and other children’s advocates in teaching parenting skills, supporting public education, and advocating for legislation at the national level that would positively affect children’s lives.

White worked to address the problems of urban families, a population previously neglected by PTA efforts.  Under her leadership the PTA developed programs that encouraged inner city children to stay and succeed in school.  She also led the effort to bring PTA to inner city neighborhoods in New York City, Boston, and Philadelphia and other major cities where the organization had not previously existed.