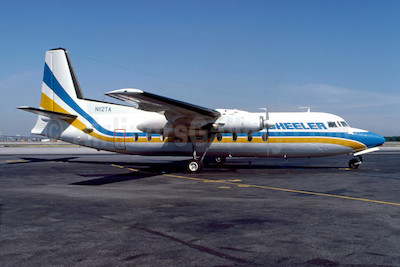 Born October 1, 1943, into a prominent African American Durham family, Warren’s father John H. Wheeler worked in the banking industry while his mother Selena Warren Wheeler was a librarian. Over the course of Wheeler’s life, both of his parents involved themselves in civil rights activities.

Early on, Wheeler had a strong desire to become a professional aviator. By the time he graduated from Hillside High School in his hometown in the early 1960s, Wheeler had obtained credentials to fly privately. Shortly after that, he enrolled at Greensboro’s North Carolina A&T College (now North Carolina A&T University), a historically black college (HBCU), to begin his studies for a B.S. in Electrical Engineering.

After realizing he did not want to pursue a career as an engineer, Wheeler dropped out of North Carolina A&T and followed his early passion by enrolling in the American Flyers School in Ardmore, Oklahoma, in 1962. At age nineteen, he completed the course and gained his commercial pilot’s license. Wheeler returned to North Carolina where he was unable to obtain employment in the local airline industry because of his race. Undaunted, Wheeler opened a piloting academy in 1962, mainly as a practical method for acquiring flight hours so he could ultimately gain a commercial piloting job. Operating out of Chapel Hill’s Horace Williams Airport, Wheeler’s flight academy allowed him to purchase a plane and to team with the University of North Carolina at Chapel Hill to instruct some its white pupils who wanted to learn to fly. While operating his academy, he also chartered flights at Horace Williams Airport as a means for obtaining additional commercial flight hours.

Warren H. Wheeler headed Wheeler Airlines over its entire existence (1969–1991). The greatest entrepreneurial venture of his life, the company progressed steadily under his leadership. Around 1976, because of an increase in business, Wheeler Flying Service was renamed Wheeler Airlines. At its zenith, Wheeler Airlines was chartering flights for over forty thousand customers annually. This success allowed the airline to add several planes to its fleet. Wheeler also established Wheeler Regional Airlines, which provided nationwide air service to its clientele. In 1983 Wheeler created Caribbean Wings as a subsidiary of Wheeler Airlines.

As an entrepreneur, aviator, and businessman, Wheeler also paved the way for African Americans and other people of color who sought aviation careers. Beginning in 1979, Wheeler became the first airline owner to use various government employment training programs such as the federal Comprehensive Employment Training Act (CETA) to train unemployed and impoverished people of color who wanted careers in the airline industry. In addition to giving these pupils practical instruction, Wheeler served as their employment negotiator with regional and national carriers.  For this and other work, the Organization of Black Airline Pilots gave Wheeler its highest award because of his contribution to the airline industry.

Since 1994 Warren H. Wheeler has been a resident of the British Virgin Islands where he runs Caribbean Wings. His company specializes in providing air travel throughout the Caribbean Islands.