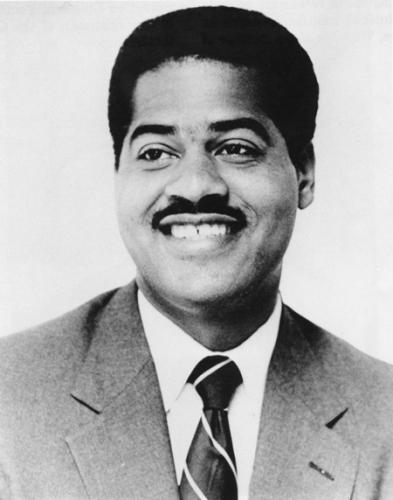 Alan Dupree Wheat, the first black Congressman from Kansas City, Missouri, was born in San Antonio, Texas, on October 16, 1951. He attended schools in Wichita, Kansas, and in Seville, Spain, before graduating from Airline High School in Bossier City, Louisiana, in 1968. In 1972 Wheat received a B.A. in economics from Grinnell College and then joined the Department of Housing and Urban Development as an economist. From 1973 to 1975 he worked in the same capacity for the Mid-America Regional Council in Kansas City. In Jackson County, Missouri he served as an aide for county executive Mike White from 1975 to 1976.  At age 25 Wheat was elected to the Missouri General Assembly.  Wheat served three terms in the Assembly where he chaired the Urban Affairs Committee.

When Fifth Congressional District Representative Richard W. Bolling announced his retirement in August 1981, Wheat entered the race to succeed him and was elected to Congress in November 1982. Unusual for African American Congressmen at the time, Wheat was elected from a predominately white district.  At 32, he was the youngest African American appointed to the House Rules Committee.  Wheat also served on the Committee on the District of Columbia and chaired the Subcommittee on Judiciary and Education. He was a member of the Select Committee on Children, Youth and Families and was Vice Chairman of the Congressional Black Caucus.

While in Congress, Wheat championed such causes as homelessness and hunger and the anti-apartheid campaign in South Africa. His legislative accomplishments included several millions of dollars for flood control projects for Missouri, an expressway system and a new federal courthouse in Kansas City.  Wheat was an early proponent of a light rail transportation system for metropolitan Kansas City. He also opposed the U.S. Space Station and the Persian Gulf War in the early 1990s citing their enormous costs to taxpayers.

Alan Wheat represented the Fifth Congressional District from January 3, 1983 to January 3, 1995. In 1994 when Missouri’s Republican Senator John Danforth announced his retirement, Wheat vacated his seat to run for the U.S. Senate.  He received the Democratic Party nomination and became the first African American selected to run for statewide office in Missouri by either major political party.  Wheat lost in the general election to Republican Governor John Ashcroft.  After his defeat, Wheat served as a vice president for the CARE Foundation’s international relief programs and was a vice president at the SmithKline Drug Company. In 1996, after President Bill Clinton won a second term, Vice President Al Gore appointed Alan Wheat as his chief of staff.

Alan Wheat is married to Yolanda Wheat, the former Vice Chair of the Missouri Democratic Party.  The couple has three children and lives in Kansas City, Missouri.